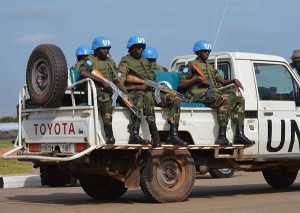 Six UN peacekeepers were killed and 30 wounded when suspected Islamists attacked their base in northern Mali, officials said.

The six Guinean peacekeepers were killed in an early morning assault on a camp in the northeastern town of Kidal belonging to the United Nations’ Minusma, according to a Guinean source in the mission and a military source in Conakry.

Malian Islamist group Ansar Dine, responsible for several previous assaults, claimed the attack by a Mauritanian jihadist as “a message to the crusader aggressors and all those who support them” in a statement carried by a Mauritanian news agency.

The latest attacks highlighted the vulnerability of Mali’s sprawling, arid north, where UN troops and Malian soldiers are struggling in their fight against jihadists who seized vast swathes of territory in 2012.

UN Secretary General Ban Ki-moon condemned the “massive and complex” attack on the Minusma base, warning that targeting peacekeepers constituted a war crime and pledging to support the Malian government.

Suicide bombers drove a vehicle into the base between two rocket launches, then blew it up, the Guinean source said.

The raid coincided with a visit to northern Mali by the new Minusma chief, Mahamat Saleh Annadif, who said the raid was an irresponsible act that highlighted the “confusion in the ranks of the enemies of peace”.

Annadif was in Kidal a week after a peace pact eased tensions in the town, where the arrival of members of a pro-government group in early February upset the former rebels in the Coordination of Movements of the Azawad.

Azawad is the name the traditionally nomadic Tuareg people of the desert use for territory they regard as their homeland, straddling the southern Sahara and the Sahel.

In a separate attack, three Malian soldiers were killed and two others were wounded near the fabled city of Timbuktu, a military source said.

“Three of our men died today between Timbuktu and Goundam when they were ambushed by jihadists,” the source said. “Two others were wounded but their lives are not in danger.”

President Ibrahim Boubacar Keita said there was a pressing need to secure the north.

“We have to find a solution to this,” he said.

“Kidal cannot remain like this… where attacks occur on a daily basis and we and the international community look on.”