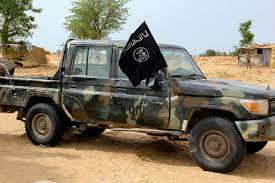 Jihadists have killed five policemen in an attack on a northern Nigerian town where more than 100 schoolgirls were abducted two years ago, like reported by dailymail.co.uk.

“This morning, we collected the bodies of five policemen killed in the fight with the insurgents,” a resident told AFP on condition of anonymity.

“The attackers came around 5:00 pm (1600 GMT) and started shooting indiscriminately which made everyone to scamper indoors,” he said.

Another resident said the policemen fought back, killing two of the fighters but were over-powered by the heavily armed jihadists, leaving five officers dead.

“We are preparing to convey the bodies to Damaturu,” the state capital for their burial, he said.

The jihadists made away with two vehicles, one belonging to the police and the other from local hunters fighting alongside security forces, residents said.

The attack came on the same day that 14 people, including six soldiers and four policemen, were killed when rival jihadist faction, Boko Haram attacked a military base in Damboa in neighbouring Borno state.

In February 2018 more than 100 schoolgirls were abducted by the group from their hostels in an abduction which evoked memories of a similar kidnapping of over 300 schoolgirls in Chibok Town, in Borno state, by Boko Haram.

A month later, ISWAP released the majority of the Dapchi schoolgirls following negotiations with the government but kept in captivity Leah Sharibu, the only Christian among them because of her refusal to renounce her faith.

A global campaign has since been launched for her release.

A decade long jihadist insurgency in Nigeria’s northeast has killed 36,000 people and left more than 2 million displaced and in need of humanitarian aid.

The conflict has spilled over into neighbouring Cameroon, Chad and Niger.