You are here: Home / Africa / Jihadists kill 2 soldiers in Mali 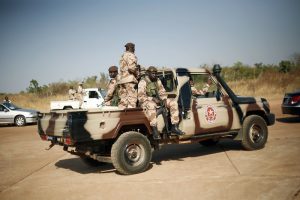 “Terrorists on motorbikes opened fire” on two soldiers from the National Guard at Gossi, south of Gao, a major city in the region, a military source told AFP.

Another source said the two men were shot in the head.

“The army responded. To the best of our knowledge, there are no victims,” a security source told AFP.

At least four civilians were killed in the north on Friday and Saturday and authorities have banned motorbikes and pick-up trucks in some areas to prevent further jihadist attacks.

Such vehicles are often used by Islamist fighters, in the north and the center of the country.

The ban applies to a dozen “circles” in the central regions of Segou and Mopti and northwest Timbuktu region, a military statement said.

Islamic extremists linked to al-Qaida took control of the desert north of Mali in early 2012, but were largely driven out in a French-led military operation launched in January 2013.

In June 2015, Mali’s government signed a peace agreement with coalitions of non-jihadist armed groups. But Islamist insurgents remain active, and large tracts of the country are lawless.