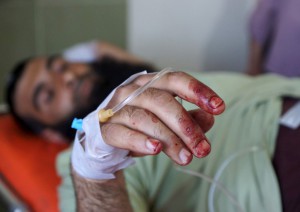 France’s scramble to confirm the reported killing in Syria of a key Islamic State recruiter shows the headache authorities face in pinning down evidence of jihadists’ deaths, which may be fabricated for strategic reasons, experts say.

Since Saturday, rumors have swirled about the purported death of Omar Diaby, alias Omar Omsen, who set up a French-speaking network of jihadists in Syria and played a big part in broadcasting Internet propaganda.

Authorities are being cautious because so many announced deaths have turned out to be spread fictitiously to allow people to lie low.

Frenchman David Drugeon, a young convert to Al-Qaeda in Afghanistan and then Syria, was recently pronounced dead in an American drone attack, before it was disproved.

“We just can’t confirm the deaths of people out there,” Alain Chouet, a former French spy chief, told AFP.

“You need either to collect DNA or have reliable witnesses. But in these cases, we have neither. And we won’t get them either,” added Chouet.

Much of the problem, according to Chouet, lies in the impossibility of getting spooks on the ground in areas controlled by the Islamic State group in Iraq and Syria.

“In terms of access on the ground, I don’t think we have any or that anyone has any. Far too dangerous,” said Chouet.

Western spy agencies have “no capacity to investigate or cross-check.”

‘Not like the movies’
Another former head of an intelligence service, who requested to remain anonymous, agreed that the real problem in confirming jihadists’ deaths was a lack of human resources.

“Getting agents in there who can say ‘he’s still alive, I saw him’ is impossible. Too dangerous. Real life is not like the movies,” said the source.

“The best-case scenario is to be able to talk to double-agents, people who, without knowing who they are talking to, offer up information. Alternatively there are jihadists who come back and agree to talk.”

In the absence of such hard information, security services rely heavily on gathering intelligence electronically.

“We bundle up a whole load of information: for example, telephone numbers. We watch them. If, suddenly, they go quiet, they could be dead,” said the former spymaster.

However, targets often work out that they are being watched and go into “radio-silence” mode. “They’re not stupid,” he said.

Authorities also wait until they are absolutely sure before announcing the death of a key target, not making it official until either the body has been seen or DNA samples have confirmed the death beyond doubt.

“That was the case with (Osama) bin Laden. The Americans had the body, but they collected the DNA from a member of his family to make sure it was him and not a double,” said the former secret agent.

Governments have to be especially careful, as it may be particularly convenient for some potential targets to be thought of as dead.