You are here: Home / Senza categoria / Jihadists are crossing America’s porous borders and Biden is making it worse 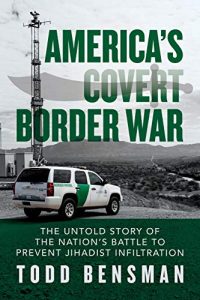 During the 2016 election, one of the major issues the media refused to discuss was the extent to which foreign-born nationals might play a role in jihadist terror attacks on U.S. soil. This was during the height of the debate over the admission of Syrian refugees and against the backdrop of the migrant crisis and subsequent terror attacks in Europe, like reported by thefederalist.com. (Indeed, there are signs the recent mass shooting on a grocery store in Colorado may have been an Islamist terror attack – the shooter was a Syrian refugee who came here as a child and was a U.S. citizen)

But given that a key plank in Donald Trump’s platform was the insistence on building “a big, beautiful wall” to keep out potential terrorists, among other threats, the last thing the media wanted to do was admit that terrorism was a potential consequence of a porous border. So the media mercilessly mocked and derided claims that foreign terrorists might seek to cross a largely open border as the fever dreams of xenophobic rubes.

The irony was that America’s intelligence and counterterrorism officials were all too aware of the cross-border threat. After 9/11, with bipartisan support, the U.S. government built an expansive covert intelligence system intended to detect and intercept this very real threat. It is worth keeping this backdrop of media silence in mind to contrast against while reading Todd Bensman’s America’s Covert Border War: The Untold Story of the Nation’s Battle to Prevent Jihadist Infiltration.

‘Special Interest Aliens’
Bensman’s background is as a journalist of the old-school, back when the cardinal rule of journalism was to go to the place news happens, then accurately tell people what you learned. He worked the national security beat at regional newspapers like the Dallas Morning News and played a major role in breaking a number of key stories, including the federal investigation of the Holy Land Foundation, which became the largest terrorism finance trial in American history. The Dallas Morning News later bent the knee to Islamist pressure groups angry over Bensman and his fellow investigative journalists’ coverage of the story.

Bensman left journalism to join the Texas Department of Public Safety as a counterterrorism analyst, showing that good reporters really can develop the kind of subject matter expertise that media talking heads often claim but rarely demonstrate. While there, Bensman worked alongside a variety of federal agencies in the state’s fusion center, helping secure the Lone Star state and its long border with Mexico from drug cartels, criminal aliens, and, yes, even terrorists.

Here Bensman was exposed to the interworking of an intelligence system – with U.S. officials stretching from Quito, Ecuador to Washington, D.C. – singularly focused on the task of keeping potential jihadist terrorists from illegally crossing the border. In classic government jargon, the border-crossers of concern were “Special Interest Aliens (SIAs)” from a shifting assortment of countries where the threat of international terrorism was high and cooperation from local governments was limited or non-existent. A recent example is 11 Iranians caught crossing the border into Yuma, Arizona.

Upon leaving government service, Bensman went looking for the story other reporters had ignored, interviewing border security, law enforcement and intelligence officials, smugglers, facilitators, and perhaps most importantly, the Special Interest Aliens themselves, in order to paint a truly comprehensive picture of how these migrants moved across the world in order to take their chance at the border.

Bensman explodes the myth that would-be terrorists have never attempted to cross the southern U.S. border. He relays case after case of individuals with suspected links to terror who didn’t make it through the government’s dragnet:

The number of SIAs who showed up already on US terror watch lists is classified. So-called ‘Known or Suspected Terrorists,’ or KSTs, would be those on the Terrorist Screening Database list (TSDB), the Terrorist Identities DataMart Environment list (TIDE), and the No Fly List. After my departure from government, intelligence community sources agreed to let me report an indication of how frequently KSTs are caught at the southern land border. Between 2012 and 2017, American homeland security discovered that more than one hundred SIAs caught at the American southern border, or by cooperating governments en route, were already on one or more of those terrorism watch lists.

About twenty a year when averaged during those years.

Sophists are likely to argue that in the grand scheme of things 20 a year isn’t a statistically significant number given the massive numbers of migrants seeking to cross the border every year. But 20 terrorist migrants would be enough to conduct two of the 2015 Paris Massacre, which killed 130 and changed life in France irrevocably for years to come.

As Bensman is at pains to point out throughout the book, America’s counterterrorism professionals know theirs is a profession with a no-fail standard.

Near and Far Wars
Broadly speaking, the book is divided into two separate elements of the covert effort to keep potential terrorists out, which Bensman calls the “near war” and the “far war.” The “near war” consists of border patrol, law enforcement, and intelligence officials working to identify, interview, and if necessary, deport, Special Interest Aliens who reach or cross the border successfully. Bensman writes:

The rationale was that if common immigrants could reach a land border from terrorist-source countries such as Saudi Arabia, Afghanistan, Pakistan, Yemen, and Somalia, then so too could terrorist travelers from the same countries. One 2006 National Counterterrorism Center intelligence report characterized the thinking this typical way: ‘Terrorists could try to merge into SIA smuggling pipelines to enter the U.S. clandestinely…. Al Qaeda and other groups sneak across borders in other parts of the world and may try to do so in the US, despite risks of apprehension or residing in the US without proper documentation.’

The so-called “far war” is where Bensman’s reporting really shines, revealing the cat and mouse game played between professional human smugglers and American intelligence, buttressed by Bensman’s personal reporting, and interviews with the smugglers and migrants who make the journey, many of whom are surprisingly open about their methods and motives.

Bensman describes in detail the battles over who can better influence the border security and immigration officials of struggling third-world countries. American intelligence offers organizational funding, training, fancy biometric tracking tools, and the prestige of serving in a special unit to Latin American officers who can create “tripwires” that let the Americans know when a Special Interest Alien raises red flags at a border crossing.

American intelligence can question the migrant in question and, if necessary, lean on the country’s officials to send them back whence they came. But all too often cold, hard cash from smugglers trumps government-to-government cooperation.

The smuggling kingpins against whom the Americans are competing are a fascinating bunch. These men and women have a special knack for the mixture of logistics, linguistics, ingenuity, and management skills needed to run international money-making transport enterprises that rival FedEx and UPS. But the talents and skills required also make them a chokepoint that can be targeted, as Bensman explains:

When SIA kingpins are caught, the organizations they built and solely enable tend to fall apart, at least for a time. Their indispensability and the kind of people they move made them a prime HSI target from the first days after 9/11. Knocking out one of these smugglers was regarded as akin to blowing the bridge in conventional army-on-army warfare.

While one can’t help but come away with the sense that America’s counterterrorism officials have their finger in the dike of the massive populations seeking entry, Bensman does highlight that while the streams of SIAs may seem endless, those with the talent, knowledge, resources and abilities to transport them are indeed a finite bunch and by targeting them for investigation and arrest America’s border security professionals can make a major impact.

Given Bensman’s extensive reporting of intercepted potential threats, and his obvious respect for the substantial cross-border counterterrorism mechanism the U.S. government has built since 9/11, one could be forgiven if one came away from reading America’s Covert Border War with the view of a problem largely well-managed.

But 20 years after 9/11, cracks are developing in a patchwork dam hastily erected. Bensman notes there has never been any significant government-wide audit of the system, which spans multiple agencies and departments. Even basic questions like preferred nomenclature, or agreement as to which countries ought to be inclined on the list of “countries of concern,” are not standardized, and can rapidly become political hot potatoes. Bensman writes:

…the country lists have fluctuated wildly depending on diplomatic and political winds. In August 2011, for instance, a DHS Office of Inspector General report disclosed that Obama administration officials decided the 2003 list was ‘outdated’ and had to be ‘eliminated’ because it was ‘not based on any judgment that the states listed supported, sponsored or encouraged terrorism.’ The Obama administration felt it was time to eliminate the list because ‘many of the states listed are important and committed partners of the United States in countering terrorism.’

Other challenges include a lack of willingness to dedicate the necessary manpower to meet a no-fail standard. While 100 percent of Special Interest Aliens are supposed to be interviewed at the border, Bensman estimates the real number is closer to only a third of all SIAs being interviewed before bonding out to disappear into America’s interior.

Not only that, but even cursory record checks are not always completed. Bensman laments,

It gets worse. Keeping in mind that ICE detention centers are the last possible line of defense before SIAs are released into the nation’s interior on their own recognizance, a 2011 DHS Office of Inspector General audit discovered that ICE wasn’t consistently following DHS policy that it run database checks on all detained SIAs from ‘specially designated countries’ before their release to determine if they were wanted by anyone. That wasn’t done in more than half the 116 cases the auditors randomly checked. A more worrisome finding was that no one checked 100 percent of the time even to find out whether SIAs were on terrorism watch lists. The number of oversights was small, only 3 percent of the cases randomly checked. But as I and the auditors knew, small numbers portend unacceptably grave consequences.

The ‘Biden Effect’
Recent moves by the Biden administration suggest that, rather than address the growing holes in the border net, the Biden administration is inclined to widen them. Within hours of taking office, Biden signed executive orders to terminate successful Trump-era efforts as part of a sop to the Democrat’s left wing, which is virulently anti-enforcement.

The Biden administration is also currently reviewing asylum policies with an eye towards making changes that will make it even easier for asylees to game the system. As Bensman notes in the book, America’s asylum policies are already disturbingly lax, and provide a ready entrance to the United States for anyone who can capably memorize a suitable sob story.

These changes are not lost on the migrants, and a “Biden Effect” is already increasing total migrant flows, which in turn increases the size of the haystack through which counterterrorism officials must sort through for potential terrorist needles.

America’s Covert Border War is a singular contribution to reporting on the nature of America’s post-9/11 efforts to secure the U.S. homeland, and a necessary refutation of a lie by omission that a politicized media has perpetrated upon the American people.