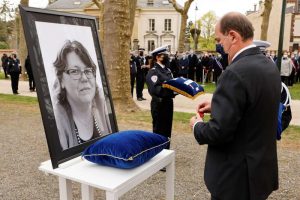 Nine days after a jihadist magazine offered a $60,000 reward in Bitcoin for anyone who killed a “crusader policeman”,  a French policewoman in Rambouillet had her throat cut by a lone attacker, like reported by thearabweekly.com.

Last month, police assistant Stéphanie Monfermé was stabbed twice in the throat and murdered by Jamel Gorchene who allegedly shouted “Allahu Akbar” when he attacked her in the entrance to Rambouillet police station, as she was returning from a break. The 49 year-old mother of two has been awarded a posthumous Legion d’Honneur.  Her 36 year-old Tunisian  killer will receive nothing, since he was almost immediately shot dead by Monfermé’s colleagues.

It is not yet clear if Gorchene, who was not known to have had any terrorist links, actually heard about the $60,000 bounty for killing a Western policeman in the multi-lingual web magazine “Wolves of Manhattan”. However, two days after his April 23 attack, France’s anti-terror prosecutor said that Gorchene had been watching jihadist propaganda videos shortly before his crime.

Based on an analysis of the killer’s cellphone as well as his social media postings, “his radicalisation appears little in doubt,” Jean-Francois Ricard said at a press conference.

The Wolves of Manhattan magazine produced by the pro-al-Qaeda Jaysh Al-Malahim Al-Electroni in Arabic, French and English, launched last November with an article on COVID-19, suggesting that jihadist extremists should give their victims poisoned protective face masks.

According to the Jihad and Terrorism Threat Monitor (JTTM) produced by the Middle East Media Research Institute (MEMRI), the second issue of the Wolves magazine appeared on April 14, nine days before Monfermé’s murder, with the  announcement of a reward in Bitcoin worth $60,000 to the first person who killed a police officer in a Western country.

The offer, says JTTM, was made in the opening article “The Lone Wolf And The Protests” in which it encouraged supporters to carry out terrorist acts under the cover of protests that are taking place in Western countries, citing the United States and France as suffering major civil unrest, as well as Italy, Germany and Britain.

“The article” says JTTM, “provides tips on which kinds of protests are easier and more effective to infiltrate, saying that a lone wolf should choose a ‘massive chaotic protest’ that take places daily and lasts for a long time, like post-election protests in the US or protests by France’s yellow vests”

“Lone wolves” should operate at night, making it easier to hide their identities and escape, disguise themselves as protestors,  claiming to have similar views and try to encourage violence, such as car ramming.

The JTTM however reports that the article discourages stabbing, since it might draw attention to the attacker who could be captured and beaten. Its main recommendation is that the “lone wolf” finds a “militiaman” or “mercenary” to do a car ramming.

JTTM quote the article as continuing “This way, you will kill a large number of Crusaders because they are all gathered. Besides, this act will have other implications, as you can incite the protesters against the police, whom you will claim to be the ones who sent this man to ram them. You will be able to enrage the protesters to steer them to fight with the police … Remember that all of the Crusaders are jointly with their government in war against Islam”.

The piece concluded “So, Wolves of Manhattan everywhere, go to protests and demonstrations to carry out your operations. Invade for the sake of Allah. Remember that an apostate and his killer will never meet in Hell. These protests are an opportunity presented to you on a golden platter. They are easy to infiltrate with Allah’s permission. Do not waste this precious chance and remember that you are avenging your people in Palestine, Burma, Kashmir, and everywhere”.