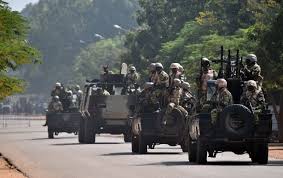 An armed attack is underway in Burkina Faso’s capital of Ouagadougou Friday, according to the national police force and the French ambassador to the West African nation.

“The specialized units of the defense and security forces are in action,” the national police force said on its official Facebook page.
Police warned people to move away from areas around the “vicinity of the Prime Ministry — and the United Nations roundabout.”
France’s ambassador to Burkina Faso, Xavier Lapdecab, urged people to act with “absolute precaution” as the attack is going on.
he US Embassy in Burkina Faso also warned US citizens to seek shelter amid reports of gunfire.
A tweet from the US Embassy read: “@Usembassyouaga has received reports of gunfire in downtown Ouagadougou. Avoid the area of downtown Ouagadougou. Seek secure shelter. Monitor local media for updates. Check back here for more updates from the embassy.”