You are here: Home / Africa / Jihadism in the Sahel is not fading away
Jihadi violence is not a new phenomenon across the Sahel, but the wider international environment has infused it with renewed momentum. 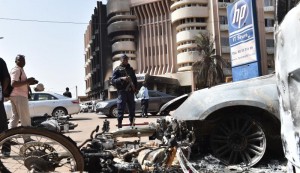 After Ouagadougou, wherever next? For the second time in two months, foreigners and locals have been slaughtered in a West African city hotel by a clutch of jihadi gunmen. On 20 November 2015, the target was the upscale Radisson Blu in Bamako, Mali. On Friday, it was the turn of the Splendid Hotel and the nearby Cappuccino cafe in the heart of Burkina Faso’s capital.

Both attacks have been claimed by Al-Mourabitoun, an Al-Qaeda-affiliated militant group founded by Mokhtar Belmokhtar, an Algerian commander, who first came to international notoriety after an assault and hostage seizure at the In Amenas gas processing plant in Algeria in January 2013. That left at least 40 victims dead.

But Algeria has a powerful security apparatus and military machine. Today, it is increasingly across the countries of the Sahel—the southern fringe of the Sahara—that the intimidating threat of jihadi terrorism is most acutely felt. These are among the world’s poorest nations, short of natural resources, investment and jobs, their traditional smallholder agriculture and pastoralism vulnerable to drought and under pressure from high rates of population growth and climate change. Moreover, this is a region whose traditionally tolerant if conservative interpretation of Islam is increasingly influenced by more fundamentalist preaching, particularly in urban areas.

Yet it would be wrong to view jihadi attacks across the Sahel as primarily the product of deep social and economic grievances, popular frustration at the inadequacies of health and education, anger over corruption among political elites or business dealings with foreigners. For this is a region that has also seen significant progress in development, economic growth, literacy and life expectancy. There is a long and mostly positive history of international engagement, with NGOs heavily involved in grassroots rural projects, numerous personal and community connections to Europe, and a Western presence that is mostly unostentatious and well-integrated locally.

In attacking a capital city hotel, cafe or restaurant—as also happened in Bamako in March 2015—the jihadi groups are assaulting not only foreigners but those locals who work and socialize with them: educated, liberal and internationally aware, a social community that typifies the increasingly close interaction between West Africa and the wider world. In that sense, today’s extremist ideology is not an indigenous outgrowth of either traditional or modern Sahelian life and it is certainly not a reflection of the predominant local popular attitudes to Europe or the US.

However, it would be self-deluding to regard the persistent extremist threat across the Sahel as a purely alien phenomenon, imported from North Africa or spawned solely by the global upsurge in radical jihadism.

Certainly, it is true that today’s threat first developed from the aftermath of Algeria’s bloody civil war between the state and Islamist militants. As that conflict faded, some fighters moved down into the Sahara and over the border into northern Mali. There, weak security forces, growing drug traffic and a long history of sporadic rebellions by local Tuareg nomads created a comfortable environment for the emergence of a group that soon took the name Al-Qaeda in the Islamic Maghreb (AQIM), appending its loyalty to the global jihadi franchise. It soon began to generate a rich revenue stream from a share of the narcotics trade and by seizing Western hostages for ransom in both Mali and Niger.

AQIM was still mainly Algerian-led when it linked up in late 2011 with a local Malian politician and former rebel, Iyad Ag Ghaly, who had founded his own Islamist armed group, Ansar Dine. Briefly collaborating with secular Tuareg separatists, whom they soon elbowed aside, the militants gained control of the northern half of Mali in early 2012—a task facilitated by the collapse of morale in the army, whose disenchanted troops then seized power in a putsch in March 2012. The radicals’ military campaign was also aided by a huge influx of weapons and fighters from Libya, in the aftermath of the collapse of the Muammar Gaddaﬁ regime.

The intervention of French and West African forces in Mali in early 2013 rapidly brought the jihadi territorial control of northern Mali to an end, and many militants were killed. But many others dispersed into the Sahara, where they gradually reorganized and began to stage attacks on the international forces and elements of the Malian state.

That violent extremism continues today. And it is not purely the work of foreigners. Groups such as AQIM and Al-Mourabitoun are a blend of outsiders and local recruits, while Ansar Dine and the Macina Liberation Front—which staged several attacks in central Mali in 2015—are largely indigenous. Local factors remain a crucial influence. The militant activity in the Sahel and Sahara is quite distinct from the long-running campaign of Boko Haram, which is rooted in northeast Nigeria.

Jihadi violence is not a new phenomenon across the Sahel, but the wider international environment has infused it with renewed momentum. Islamic State of Iraq and Syria (ISIS) is confined to pockets of northern Libya and has not so far penetrated across the Sahara. But the south of the country is a vast ungoverned space, where various militant factions train and resupply.

Moreover, the Bamako and Ouagadougou attacks appear in part to be a deliberate statement by Al-Mourabitoun, endorsed by AQIM—who are keen to show that despite the international spotlight on ISIS, they too remain capable of staging major assaults on Westerners and those that associate with them.