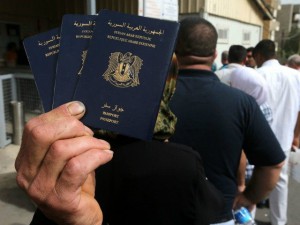 The Islamic State (IS) terror group has an entire “industry” that revolves around the creation of fake passports, a French officials told reporters on Monday.

Bernard Cazeneuve, the Interior Minister of France, told reporters on Monday that the Islamic State has set up a “real fake document industry” that is currently based in IS strongholds in Syria, Iraq, and Libya. The French official released his statement following a meeting with European Union members that was focused on dealing with counterfeit documentation papers.

“[Islamic State] has managed to seize passports in Iraq, Syria, and Libya” and to set up “this fake passport industry,” Cazeneuve told the press.

His statements come following a major U.S. intelligence community investigation that found Islamic State may have indeed had the capability to print authentic passports.

In December, U.S. intelligence officials revealed their suspicions that Islamic State had acquired the machinery available to print fake Syrian passports, according to ABC News. A Homeland Security Investigations report said IS may have been printing fake passports since at last summer. The report warned about the possibility that the jihadi fighters had already clandestinely made their way into the United States.

“Since more than 17 months passed since Raqqa and Deir ez-Zour fell to [Islamic State], it is possible that individuals from Syria with passports ‘issued’ in these ISIS-controlled cities… may have traveled to the U.S.,” the report said.

At the time, the intelligence report was classified as having “moderate confidence” in its findings.

And in December, FBI Director James Comey expressed the possibility that Islamic State could very well create its own Syrian passports.

“The intelligence community is concerned that they [Islamic State] have the ability, the capability to manufacture fraudulent passports,” Comey said while testifying on Capitol Hill.

Fake passports have already been found on two of the suicide bombers who were part of the Islamic State attack on Paris in November, officials said. They were believed to be part of a convoy of Syrian refugees, according to reports.

In an analysis carried out by German police, officials found that the fake passports appeared to be genuine, according to their verification systems.

Passports can also be obtained through Islamic State by members of the public at a cost of between $200 to $400 dollars, according to a report.