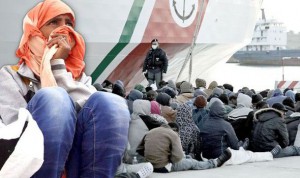 Scores of Islamic State terrorists are believed to have smuggled their way into Europe among the migrants fleeing North Africa.

And it is feared the IS bombers could launch an attack within months.

Experts think the extremists have posed as asylum seekers after travelling on boats trafficking people from Africa to Italy.

A counter-terrorism source said: “It is widely believed that terrorists in groups and individually have been able to stow themselves on trafficking vessels and make the journey across the Mediterranean. Once in Europe they can go through the asylum process or disappear off the radar of the authorities by linking up with even more smuggling networks.

“This means they can penetrate deeper into Europe and avoid detection from the police and security services. Nobody knows just how many there are.”

With a further 500,000 desperate people gathering in war-torn Libya and preparing to risk a hazardous journey to the Italian coast it is feared that even more IS terrorists could be on their way.