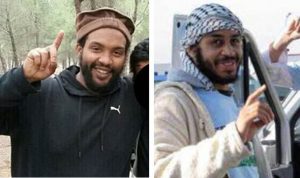 Two British militants accused of being in the same terror cell as infamous executioner Jihadi John have warned there are more Islamic State-linked terror attacks to come in the West.

Alexanda Kotey and El Shafee Elsheikh, formerly of West London, were captured by the U.S.-backed Syrian Democratic Forces (SDF) in January, and are currently being held in the north of Syria by Kurdish forces.

Speaking to Sky News in an interview, they now claim to had survived the war because “God decreed” it.

The would not specifically condemn the Islamic State-inspired attacks on London, Manchester, Paris, or Brussels, but argued they were not responsible for the group’s violence.

Both men openly admit membership of the Islamic State terror group, but argue they were affiliated for religious reasons, and sought to distance themselves from the group’s brutality by comparing it to the British army.

Mr. Elsheikh said: “We are in no way justifying anything Islamic State did. It is not an obligation of me to justify or condemn.

“You being a British citizen, you don’t turn around when Britain commits some war crime and say ‘But I didn’t sign up for this’.

“You didn’t sign up for it, you were born British. Many people who became religiously aligned to the Islamic State, it is a default, just like being born into a certain country.”

Their alleged cell’s infamous ringleader, Mohammed Emwazi, was known as ‘Jihadi John’ in the Western media after brutally beheading innocent Western captives on camera. He was killed in a drone strike in 2015.

In the interview, Mr. Kotey said Islamic State footage of executions was “propaganda” and the Western media was to blame.

He said jihadist beheadings were a “bit like if a coalition airstriker carried out one of his airstrikes under collateral damage or the guise of it”.

In a previous interview, given to AP last month, the pair of alleged killers complained about losing their British citizenship, claiming it denied them the right to a fair trial.