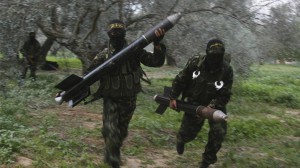 A jihadi group that recently emerged in the Gaza Strip claimed Friday a mortar attack on a base belonging to the Islamist Hamas movement in charge of the blockaded territory.

In a statement posted online, the group calling itself Supporters of ISIS in Jerusalem said it fired mortar rounds at a base used by Hamas’s armed wing, the Ezzedine al-Qassam Brigades, in Khan Yunis in southern Gaza.

A bomb attack this week targeted Hamas’s security headquarters in Gaza after radical Islamists issued a threatening message calling for the release of prisoners.

Hamas security forces arrested a Salafist leader last month, alleging that he was a supporter of ISIS, which holds vast swathes of territory in Syria and Iraq.

Gazan jihadis have pledged allegiance to ISIS in the past, but there has been no confirmation from the group itself that it has a presence in the coastal enclave.