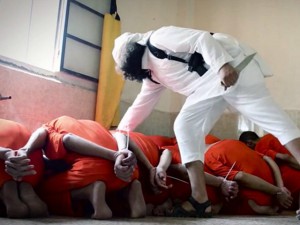 A top Salafi leader has addressed the weaknesses of jihadi strategy following severe losses suffered by jihadi organizations, chief among them the Islamic State.

In an interview published in jihadi forums, Abu Katada, a UK-based Palestinian-Jordanian cleric, said that at the heart of the jihadi defeat lies a misunderstanding of the concept of a state.

The influential theologian, one of Osama bin Laden’s spiritual leaders, said that IS’s attempts to establish a Western-style state is what made it vulnerable.

“We need to aspire to a different state, where the existence of a capital city isn’t paramount,” he said. “Taking over the capital isn’t the most important thing. A capital city is a Western concept, and the importance attributed to it is part of the modern conception of a state.

“We don’t need a state that has a seat in the United Nations, because it has artificial boundaries, while the Islamic state, the Islamic home, has to be portable, flexible and unbound by frontiers. The state, or the house, could govern at night and disappear during the day. That’s what the Taliban do.”

Abu Katada added that fixed boundaries play into the hands of the enemy.

“The Mujahideen need to square the circle, the state appears and disappears, governs at night and disappears during the day, the most important thing is to prevent the enemy from taking it over even if he invaded. We may not control some parts of the state, but it’s paramount that we have the ability to hurt the enemy and prevent him from gaining a foothold on the ground.”

Abu Katada, who spent some years in a British prison for incitement to terror, said that the state “should not conform to Western standards, like those of the UN, the Arab League, the World Bank or the International Court of Justice. That would turn it into another Western state, and not an Islamic state that is governed according to God’s criteria.”

“The modern state needs a capital city, international recognition, a currency, and I’m afraid some Islamic organizations are seduced by these,” he said. “The Islamic state or home don’t need a capital city, they can exist in a small town or village, it doesn’t need representation in the UN General Assembly nor does it need borders. Succumbing to your enemy’s monetary system could allow him to inflict economic damage, even in the event of military gains. The state must be bouncy, unable to be controlled by the enemy. Only when the enemies subside will we be able to regulate the state apparatus and care about bringing the others [i.e., non-Muslims] under its mantle, whether voluntarily or not.”