You are here: Home / Africa / Jihad: security emergency across the entire Maghreb 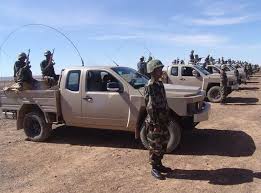 The Sousse killings has sparked a domino effect in security measures adopted by North African countries, which have long been concerned about terrorism and have adopted a number of military and intelligence measures.

*ALGERIA – The country has seen itself as being in a perpetual state of emergency against Islamist terrorists since the 1990s civil war. In recent hours some thousands of men have been added to those already deployed along the borders with Libya and Tunisia. New measures have been activated between Tébessa and Oued Souf and between Souk-Ahras and El-Tarf. The line of control has been strengthened between sighting towers (many have been built in record time) with night vision and by helicopters that for months have been flying over the border areas, often providing logistical support for their Tunisian counterparts. Algeria collaborates with Tunisia and its intelligence services, which are the most well-equipped in the area.

* MOROCCO – since the Casablanca attacks in 2003, the kingdom has progressively raised their attention to the terrorist danger. There have not been any news of further strengthening of security, which is in any case already very high and has recently seen qualitative improvement in armaments. In recent weeks, a Bureau Central d’Investigation Judiciaire(BCIJ) was set up, dubbed the ‘Moroccan FBI’, specialized in anti-terrorism operations and which flanks the military with intelligence operations.

* MAURITANIA – Its geographical position (facing onto the Atlantic and bordering Morocco, Algeria and Mali) makes it a potential terrain for terrorist acts, such as occurred in the middle of the past decade and a more recent attempt to kill President Abdelaziz. The president, as a former soldier (has been in power since 2008 after a coup d’etat) has imposed tight border control that, due to the extension and nature of the places, does not provide any reassurance on the effectiveness of the measures.

* MALI – Despite the positive results of military operations conducted in the northern part of the country by the France-led military contingent, Mali is still a loose cannon in the region as it became – in the period in which the north was in the hands of a number of jihadist and separatist groups – a ‘free zone’ in which terrorists arrived from abroad knowing that they would find hospitality and protection or training. Border control is still a mostly relative concept and the only certainties derive from the French military presence (currently as part of the Barkhane operation, and the Serval operation prior to that).