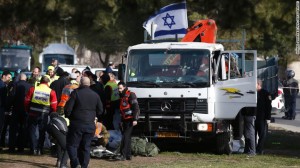 Israeli Prime Minister Benjamin Netanyahu said on Sunday a Palestinian truck driver who rammed a group of soldiers in Jerusalem, killing four and wounding 15 others, was likely a supporter of Islamic State, according to reuters.com.

“We know the identity of the attacker, according to all the signs he is a supporter of Islamic State. We have sealed off Jabel Mukabar, the neighbourhood from where he came, and we are carrying out other actions which I will not detail,” Netanyahu said in a statement.

The incident was the deadliest Palestinian attack in Jerusalem in months and targeted officer cadets who were disembarking from a bus that brought them to the Armon Hanatziv promenade.