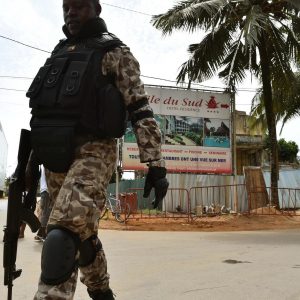 Two assailants were also killed and four others were detained, the sources said.

There was no immediate claim of responsibility for the attacks. An Ivorian army source said the attackers had been identified as from neighbouring Burkina Faso, but this could not be confirmed.

The military sources said two soldiers were killed in a raid on a military camp in Kafolo near the border with Burkina Faso. An officer stationed at another post in nearby Tehini was killed as the assailants fled the scene, they said.

Weapons and other military equipment were seized in the raids, and Ivorian troops were carrying out a search operation in the area, one of the senior military sources said.

Thirteen soldiers were killed when the Kafolo military outpost was ambushed last year. The defence ministry blamed the attack on jihadists, and dozens of suspected militants were arrested.