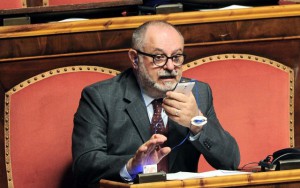 The head of Italy’s security agency urged Syria and Iran to work together to triumph over the Islamic State.

“Syria and Iran should stand together to defeat the plague of ISIS, ” said Giuseppe Esposito, deputy president of COPASIR, the Italian Parliamentary Committee for Intelligence and Security Services.

Esposito delivered a speech at the conference on ‘Security challenges in Europe’ organised at the Italian Senate by the Foundation for a Europe of Liberties and Democracy.

“Italy and the EU should both promote a peace plan for the Middle East, not only for Libya. The United States is no longer focused on the Middle East and the problem is that the EU has not taken the place of American diplomacy in the area,” said Esposito.

With regard to ISIS, Esposito underlined that “there is more communication than anything else.” He added, “It is absurd that no arrest warrant has been issued yet for the caliph, Abu Bakr al-Baghdadi.”.