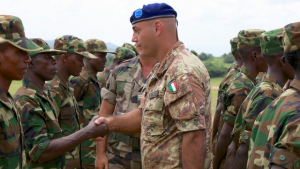 Military action is inevitable in the fight against terrorism and more should be done to tackle religious persecution, Italy’s foreign minister said according to JP.com.

“Responding to terrorism inevitably implies military consequences. This may shock some people but these groups must also be dealt with on a military footing. I won’t use the word ‘combat’ to avoid being painted as a crusader,” Gentiloni said.

He noted that Italian forces are committed to training local armed forces in Somalia that fight against the al-Qaida-linked al Shabaab militants who singled out Christians in a shooting on Thursday at a university in Kenya that killed nearly 150 people.