You are here: Home / Mediterranean / Italy to open hospital, deploy 300 soldiers and doctors to Libya

Italy has already flown dozens of Libyan fighters to Rome for medical treatment, but the hospital will be more efficient 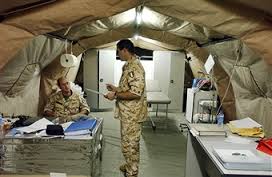 Italy will set up a military hospital and deploy 300 doctors, nurses and soldiers in Libya at the request of the United Nations-recognised government in Tripoli, a government source said on Monday.

The hospital near the Misrata airport will be staffed by about 100 doctors and nurses and guarded by some 200 soldiers.

It “should be a safe location, but not too far from the battle zone,” the source said.

Libyan forces aligned with the U.N.-backed government have been fighting to drive Islamic State militants out of their former stronghold of Sirte for months, but they have faced stiff resistance and suffered numerous casualties.

Italy has already flown dozens of Libyan fighters to Rome for medical treatment, but the hospital will be a faster and more efficient channel for assistance, the source said.

No further details were provided, including the exact timing of the deployment.

While France, Britain, the United States and Italy have acknowledged having special military units in Libya, this will be the first overt troop deployment by a Western nation, albeit for a humanitarian mission.

Defence Minister Roberta Pinotti and Foreign Minister Paolo Gentiloni may provide further details when they address parliament on Tuesday about “the situation in Libya”.

Italy has historic ties to Libya, which it colonised during the first half of the 20th century. Libya lies directly south of Italy, less than 500 km (310 miles) from the Sicilian coast.

Today, amid the chaos of civil war, people-smugglers operate in Libya with relative impunity. They have sent more than 400,000 migrants in rickety and overcrowded boats to Italy since the beginning of 2014.