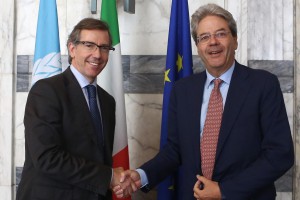 Despite four of its citizens kidnapped and its embassy in Tripoli shuttered, Libya’s former colonial power Italy has stepped forward as a possible bridge-builder in the country’s peace process.

Signalling a willingness to bring the two sides together, Italy’s Foreign Minister Paolo Gentiloni made a high-profile appearance in support UN envoy Bernadino Leon at peace talks in Algiers with leaders of the rump General National Congress (GNC) leadership of Tripoli.

“Our objective is to encourage an accord. We are ready to lend a hand at every level, from the economy to security,” he said in comments released by Italy’s foreign ministry.

While supporting Leon in his push to get the GNC to agree a government of national unity already agreed in principle by Libya’s internationally recognised parliament, the House of Representatives, Gentiloni said his diplomacy might deploy sticks as well as carrot in the form of sanctions against individuals obstructing peace.

“We are also prepared use individual sanctions to isolate anyone seeking to sabotage this accord,” he said, echoing similar warnings made by the EU and most recently by the US.

With elements from many other groups, including Misrata, favouring the peace plan, he emphasised that the onus was now on the GNC to step up.

“Of course, an agreement that the GNC decided to exclude itself from would be a weak one; if they count themselves out, they forfeit the opportunity to bring their demands to the table.

Italy had in the past suggested peace keepers to monitor any unity government agreement, and the EU was also working on an enhanced naval mission to both rescue migrants and target migrant smugglers, he said .

“We have been very clear in stating that Italy is ready to make a contribution if and when the stabilisation process begins. We will do our part and it will be considerable.”

In relation to the four Italians kidnapped last month, sources inTripoli have told the Libya Herald that they were not kidnapped by Islamist militants or for ordinary ransom but by forces linked to the Samoud front, the aim being to pressurise Italy and , through it, the European Union into adopting a more conciliatory approach to the Tripoli regime.

It has not been possible to confirm the reports.