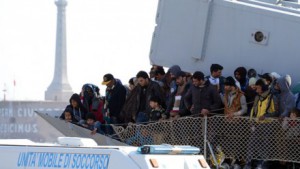 European leaders will discuss introducing quotas on migrants arriving in Europe each year in upcoming talks in Luxembourg, with Italy threatening a “strong response” if no deal can be reached.

One of the key areas of discussion will be how to distribute asylum seekers more evenly between the 28 EU states. Italy, Greece and Malta are experiencing “a large strain on resources”, The Independent notes, as the number of arrivals from Africa and the Middle East continues to grow.

Some EU countries, including Germany and Austria, support a deal that would seek to distribute 60,000 asylum seekers across Europe, but others argue that migrants should be able to choose where they settle, rather than being sent to arbitrary countries.

More than 100,000 boat people have landed in Italy and Greece this year. Italy alone has taken in 60,000 new arrivals, mainly from Libya.

The Italian prime minister, Matteo Renzi, said that if the EU could not come to an agreement on how to handle the growing crisis, Italy would enact a “Plan B”, which would “hurt” Europe.

While the details of Renzi’s Plan B have not been announced, reports suggest that Italy could prohibit foreign navies from dropping off migrants rescued from international waters in its ports.

Asked whether such reports were true, Italian European Affairs Minister Sandro Gozzi told the BBC that “we are not there yet”.

“It is clear that in a possible second phase we will apply international maritime law in all its aspects,” he said.