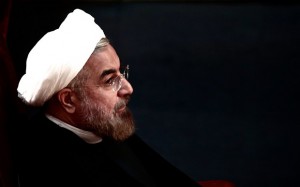 Italian senators on Thursday urged the government to put human rights before economic relations with Iran, ahead of Iranian President Hassan Rouhani’s visit to Italy on Saturday.

Rouhani is heading to both Italy and France in what is the first visit of an Iranian leader to Europe in 16 years, as ties thaw after Tehran’s nuclear deal with world powers.

In Rome on Saturday and Sunday, Rouhani will meet Italian officials and Pope Francis, while on Monday and Tuesday in Paris he will see President Francois Hollande.

On the agenda will be potential business deals – as Iran opens up to the global economy after the historic July nuclear agreement – and talks on regional issues including the conflict in Syria.

But Italian lawmakers urged the government not to turn a blind eye to human rights abuses in Iran, which they said have sharply deteriorated under Rouhani’s rule. At least 2,000 executions have taken place since Rouhani came to power in 2013.

“Iran has the highest number of executions of minors,” the senators said in a statement.

“Hangings of those belonging to ethnic and religious minorities have intensified. Some Christian priests are in prison for their beliefs. Violations of the rights of minorities, women and citizens are institutionalized.

The last visit to Europe by an Iranian leader was in 1999, when Mohammad Khatami, like Rouhani a reformist, travelled to Rome and Paris in separate trips in March and October.

He had been the first president of Iran to visit Europe since the country’s 1979 Islamic revolution. Khatami during that visit also held talks at the Vatican, meeting then pontiff John Paul II.

The choices of France and Italy for both visits are hardly surprising – before sanctions were imposed on Iran in 2006 over its nuclear programme, the two countries were the oil-and-gas-rich nation’s main European economic partners.

Both are keen to resume that cooperation after the July 14th accord, which saw Iran agree with six world powers (Britain, China, France, Germany, Russia, and the United States) to curb its nuclear programme in exchange for the lifting of sanctions.

A steady stream of foreign business leaders have been making their way to Tehran since the deal, eager to seize their share of the Iranian market and its 78 million people.

French Foreign Minister Laurent Fabius and Italian counterpart Paolo Gentiloni were among the first Western officials to visit Tehran over the summer, bringing the invitations for Rouhani’s European trip.

In an interview with France 2 public television on Wednesday, Rouhani said he expected to sign a number of documents that would “form the basis for industrial and commercial agreements”.

Among them, he said, will “probably” be a move to buy Airbus aircraft to renew Iran’s ageing fleet.

Fabius was followed in Iran in September by a delegation of some 150 French business leaders seeking opportunities.

Some – like automakers PSA Peugeot Citroen and Renault or oil giant Total, all long present in Iran – want to restart operations in the country which were reduced under the sanctions.

In Paris, Rouhani will speak Monday at UN cultural and science agency Unesco, before meeting Hollande on Tuesday for talks on Syria and bilateral cooperation.

Iran, with Russia, is the main supporter of Syrian President Bashar al-Assad’s regime, providing it with financial and military aid, including with military advisers on the ground.

Arab and Western countries including France have backed Assad’s opponents, insisting the Syrian leader must go for there to be any hope of ending the civil war that has left more than 250,000 dead since March 2011.

After initially being frozen out of diplomatic talks on the crisis, Iran for the first time joined an international meeting on the conflict in late October in Vienna. It will take part in another round in the Austrian capital on Saturday.