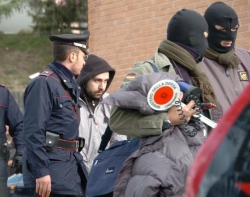 Police in Italy say they have issued 17 arrest warrants for Iraqi Kurds on terrorism-related charges in a Europe-wide blitz.

The ANSA news agency said the suspects are accused of international terrorism association.

A news conference was planned for later in the morning with Italy’s top anti-terrorism officials.