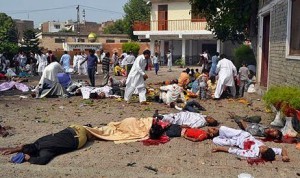 Italian police handed over to Pakistan’s Federal Investigation Agency on Thursday a man suspected of involvement in the December 2014 terrorist attack on an army public school that killed around 140 children, security officials said.

Identified as Usman Gani the suspect is a native of Mardan district in northwestern Khyber Pakhtunkhwa province.

Peshawar, where the school assault took place, is the provincial capital.

The suspect was arrested in Italy with Interpol assistance and brought to Islamabad’s Benazir Bhutto International Airport early on Thursday by Italian police.

The banned Tehreek-e-Taliban Pakistan (TTP) had claimed responsibility for the deadly school attack, saying it was carried out in retaliation to a military operation against militants in tribal areas along the Afghan border.

Following the TTP attack, the government lifted a six-year moratorium on the death penalty and since then Pakistan has hanged more than 250 death row pirsoners inlcuding terror convicts.