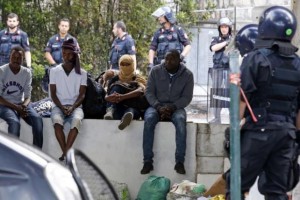 France, Italy and Germany agreed on Tuesday to join forces to identify migrants arriving by sea and to swiftly relocate them across the European Union or send them back to their home countries if their claims for asylum in Europe are rejected.

Ministers from the three countries put on a show of unity after the arrival in Europe of thousands of migrants, who make perilous Mediterranean crossings from Libya, strained the resources of Italy and Greece and raised tensions with northern European states that are the destinations of many migrants.

“You have three friends in front of you,” French Interior Minister Bernard Cazeneuve said at a joint press conference with his Italian and German counterparts in an attempt to defuse the simmering spat.

“France, together with Germany and Italy support a relocation and readmission mechanism,” Cazeneuve said during a break from a meeting of EU interior ministers in Luxembourg to discuss a plan to tackle the migrant emergency.

As they deliberated, police began removing mainly African migrants from makeshift seaside camps on the Italian-French border. Around 300 had collected on the Italian side in hopes of proceeding into France and onwards to northern Europe where relatives live and job chances might be better.

France and Austria have stepped up border controls on migrants coming from Italy, turning back hundreds and leaving growing numbers camped out in railway stations in Rome and Milan.

Italian Prime Minister Matteo Renzi said in a newspaper interview on Sunday that if EU leaders did not show solidarity with Italy, Rome had a Plan B “that would be a wound inflicted on Europe”.

To ease the strain on southern countries bearing the brunt of the migrant influx, the European Commission has proposed that EU governments relocate 24,000 asylum-seekers from Italy and 16,000 from Greece over the next two years.