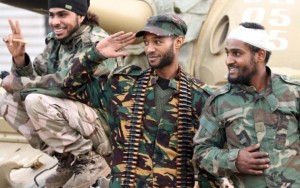 Italy’s prime minister will call on Britain to take a greater role in solving the Libya migrant crisis amid increasing Russian involvement in the war-torn country when he meets Theresa May for the first time on Monday.

Paolo Gentiloni is expected to urge the Prime Minister to take a more pragmatic approach to restoring order in Libya, including by acknowledging how Russian support for a renegade general  has changed the balance of power on the ground, like reported by telegraph.co.uk.

General Khalifa Haftar, the leader of the self proclaimed Libyan National Army, visited Moscow twice last year and was recently hosted on a Russian aircraft carrier, fueling speculation that the Kremlin may back him in a power-grab against the country’s UN-recognised government.

Last week a spokesman for his army said dozens of fighters had been flown to Moscow for medical treatment, in the latest sign of a deepening relationship with the Kremlin.

An Italian government source said Italy wants to talk to all stakeholders in Libya, including the Russians, in order to try to bring stability to the country – a process that would help staunch the relentless exodus of migrants across the Mediterranean.

More than 181,000 migrants reached Italy last year and there are fears that even greater numbers will attempt the crossing this year, as chaos in Libya grows and the EU plans a crackdown on the boats – a tough new approach that was most recently discussed at a meeting in Malta last Friday.

Libya was plunged into civil war after Muammar Gadaffi, the military dictator for four decades, was killed in a Western-backed uprising in 2011.

A political agreement establishing a UN-recognised Government of National Accord (GNA) was signed in December 2015, but critics say the new government is largely toothless and has failed to impose order even in the capital.

The largest military factions in the country today include Gen Haftar’s LNA, based in the eastern cities of Tobruk and Benghazi, and an alliance of groups based in the western city of Misrata.

Both factions have received foreign backing to fight terror groups including the Islamic State of Iraq and the Levant (Isil).

Gen Haftar, who  enjoys strong backing from Abdel Fattah el-Sisi’s government in Egypt, is seen by some as a potential secular “strong man” ruler who could re-establish some degree of security and crack-down hard on Islamist movements there.

Mrs May last night faced calls from within her own party to recognise that the Russian-backed general must play a role in any solution in Libya.

“The  view is that the GNA solution isn’t working and we still have a massive humanitarian crisis in terms of migrants and casualties in the Mediterranean,” said  Kwasi Kwarteng, the Conservative MP for Spelthorne. “There has to be some kind of transition.”

Boris Johnson, the Foreign Secretary, said earlier this week that Gen Haftar should be integrated into the current government of national accord.

The Russian foreign ministry said last week that is was talking to both groups in the hope of promoting dialogue and keeping Libya intact.

Hafez al-Sarraj, the head of the UN-backed, Tripoli-based government, is expected to visit Moscow this month.

“We are carrying out consistent work with both centers of power in Libya,” said Maria Zakharova, a ministry spokeswoman.

“We are trying to encourage them to overcome their internal differences and seek compromises on all contentious questions.”

“Everyone needs to recognize that Libya – for us in terms of immigration and for others, security – has a strategic significance that cannot be underestimated.

“Everyone must do their bit to create synergies, in that way we can head towards peace,” said Mr Alfano.

Michael Fallon, the Defence Secretary, will meet his Italian counterpart in Rome on Thursday to discuss Libya and the migrant exodus, among other topics.

Speaking ahead of the meeting, he said that the UK is considering extending a training program for Libya’s coast guard in support of operations to tackle human smugglers and arms traffickers.

The Italian embassy in London said: “Stabilisation of Libya is one of the top priorities of Italian foreign policy. To that end we are cooperating with the UN, the EU and our major partners, such as the UK and the US. We also deem it necessary to engage with all players who could help to achieve such a goal, including Russia”.