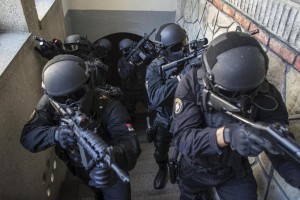 Italian police said Monday they had arrested a Moroccan suspected of promoting Islamic militancy, and that a broader police operation was under way in a town near the central city of Pisa.

Like other European countries, Italy has stepped up surveillance of individuals suspected of supporting militants in Syria and Iraq after indications that some of its citizens have travelled to the region to fight.

Last week Italian police arrested two people in Rome suspected of plotting attacks in Italy and North Africa. Five others were held in Italy and Albania who were planning to join hardline group ISIS.