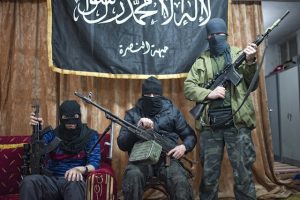 A court in Sardinia has sentenced three Syrian citizens for terrorist activities relating to membership of the group Jabhat Al-Nusra, now known as Jabhat Fatah Al-Sham, the Syrian branch of Al-Qaeda, like reported by arabnews.com.

The judges presiding over the case in the city of Olbia, in the north of the Mediterranean island, led by Justice Massimo Zaniboni, sentenced Daadoue Anwar, the man accused of leading the cell, to eight years in prison in absentia.

Anwar, 50, who owned a construction company in Sardinia, is still at large, having escaped from police custody in Denmark after Italian authorities issued an international warrant for his arrest.

It is alleged he and a relative who came to visit him in custody in Copenhagen switched clothes, allowing him to break free incognito. Italian investigators believe Anwar to have also been active in Sweden, Germany and Hungary in the past.

Fellow Syrians Chadad Mustafa and Abdulkarim Osman Haj were each sentenced to five and a half years in prison.

The court found the trio had provided the Syrian terrorist group with information and financial help for several years, until their cell was broken up by Italian anti-terror police in 2018.

“They were all very active in financing the military and terrorist activities of Al-Nusra, which is considered the Syrian branch of Al-Qaeda,” prosecutor Danilo Tronci told Arab News. “They were carrying out an abusive activity of provision of payment services carried out through the ‘hawala’ system.”

Tronci explained a long investigation in Italy and abroad confirmed that the cell was moving money from Sardinia “to finance the military activities of … Al-Nusra. Daadoue Anwar had lived for a long time in Olbia, where he had a construction company which had lots of lucrative contracts.”

Anwar’s company worked on, amongst others, the scrapped construction sites for the 35th G8 summit which had been due to be held at the nearby La Maddalena island in 2009, on the new Mater Olbia Hospital, and on redevelopments at the city’s Costa Smeralda Airport.

“We provided clear evidence to the court that the cell was using a good part of the revenues of that activity, along with substantial revenues of other financial activities run in Sardinia and in Italy, (which) were sent to Al-Nusra to fund terrorist activities in Syria and abroad. Some of that money endded up in Raqqa,” Tronci added.