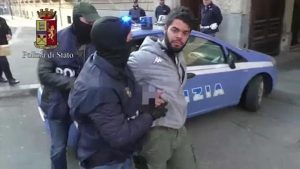 Italian police have launched anti-terrorism operations across the country in the hunt for 14 terrorists linked to a network supporting Islamic extremists in Syria.

Prosecutors said Thursday that police were exercising arrest warrants for four militants, one Syrian and three Moroccans, in Sardinia; and elsewhere in the country for 10 Syrians for money laundering and other financial crimes linked to terror financing.

Italy’s top anti-terror prosecutor Federico Cafiero de Raho told Sky TG24 that the terrorists belong to a single cell that was “collecting and distributing considerable funds to Syria to support the war.” He said all were legal residents of Italy.

Police video showed officers exercising the arrest warrants in the pre-dawn hours. It was not immediately clear how many people had been taken into custody.