You are here: Home / Africa / ISWAP terrorists kill 14 in Nigeria-Cameroon border over ‘blockade’ 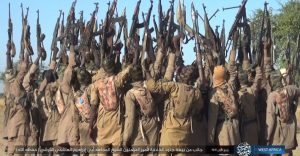 Jihadists have killed 14 people on a Cameroonian island on Lake Chad near the border with Nigeria after their town decided to block food supplies to the insurgents, security sources said Thursday according to thedefensepost.com.

Fighters from the so-called Islamic State West Africa Province (ISWAP) landed on the island of Bulgaram aboard speedboats from an enclave on the Nigerian side late Tuesday, they said.

“They came around 6:30 pm (1830 GMT) while people were preparing for evening prayers and shot dead 14 community leaders,” a security source told AFP.

Some of the victims were shot in their homes while others were killed in the mosque where they had gone to pray, said another source, who gave a similar toll.

The assault was launched after the town — a major logistical route for ISWAP jihadists on the Nigerian side of the lake — decided to cut off food supplies for the jihadists.

In recent days, local chiefs had invoked the Koran at a town hall meeting and placed a curse on any resident allowing supplies to the jihadists.

The insurgents viewed the decision as a betrayal and a show of support for the local authorities.

The past week has seen several Nigerian air raids on ISWAP strongholds that have inflicted heavy casualties, according to military and local sources.

“The terrorists believe the blockade is part of the ongoing military operation aimed at starving them while they are under bombardment,” a source added.

The Lake Chad area is a vast marshy area shared by Nigeria, Niger, Cameroon, and Chad.

Western parts of the lake have become havens for Nigerian jihadists, whose 10-year-old campaign has claimed tens of thousands of lives.