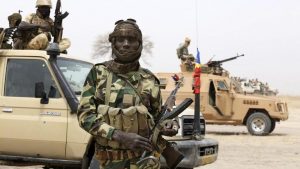 A commander of the extremist group Islamic State West African Province has been killed by a multinational African military force in an airstrike near Lake Chad, the force said according to aa.com.tr.

Amir Khalifa Umar, the third-ranked leader of the group, was “eliminated” in an attack on one of the insurgents’ hideouts near Lake Chad known as Tunbum Sabon, Timothy Antigha, chief of public information for the Multinational Joint Task Force, said in a statement.

Umar was killed in ongoing offensive operations against Islamic State West African Province, an offshoot of the Boko Haram terror group, and other purveyors of violence and instability in the Lake Chad Basin, said Antigha, adding three other extremists were killed in a separate airstrike in the Kwalaram area.

Besides being one of the top commanders of the terrorist group, Umar was also reportedly its “supreme judge”.

The multinational African military force, which comprises soldiers from Benin, Cameroon, Chad, Niger and Nigeria and is headquartered in Chad, is working to end the Boko Haram group’s terrorist insurgency in Nigeria and the surrounding Lake Chad region.

Boko Haram launched a bloody insurgency in 2009 in northeastern Nigeria but later spread its atrocities to neighboring Niger, Chad and Cameroon, which prompted a military response.

The U.S. State Department has assessed that Boko Haram and Islamic State West African Province have been responsible for the deaths of 35,000 people and the displacement of more than 2 million others since 2011.