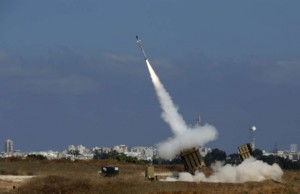 The projectiles were reportedly launched from Egypt’s Sinai peninsula, no casualties were recorded, like reported by aawsat.com .

“Some of these rockets were destroyed in flight by Iron Dome batteries,” a spokeswoman said, referring to Israel’s anti-missile interception system.

An official at Eilat town hall told Israeli public radio that three rockets had been intercepted and a fourth had exploded outside the town. The Sinai is the theatre of fierce fighting between Egyptian security forces and so-called Sinai Province, a bastion for terror groups and ISIS offshoots.

Despite the absence of casualties, a state of panic broke across the city as sounds of warning sirens went off. Police patrols swept most of the city in search of the hazardous debris left behind by the interceptors.

The last Egypt-based attack on Eilat occurred in 2012, with no losses registered.

The incident comes after several rockets were fired Wednesday evening from Egypt’s Sinai, which borders the Gaza Strip, at the Israeli Red Sea resort of Eilat. The Israeli military however had not confirmed by early Thursday that it had carried out retaliatory strikes.