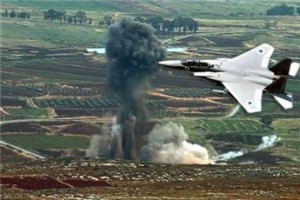 Israeli jets struck targets in the Gaza Strip early Sunday morning in an apparent retaliatory attack, hours after a rocket fired from the coastal Palestinian territory exploded in southern Israel, according to Palestinian reports.

The targets attacked were in the northern Gaza Strip, witness accounts said.

There were no initial reports of casualties and it wasn’t immediately clear what were the targets of the airstrikes.
The IDF confirmed in a statement that it had struck “terror infrastructure” targets in northern Gaza
The army also said it would close the Erez and Kerem Shalom crossings into the Strip, in an apparent punitive measure.
“The defense minister has instructed that the two crossings be closed,” the IDF said in its statement. “A decision to reopen the crossings will be made based on a situation assessment and in accordance with security considerations.”
On Saturday night, at least one rocket fired from Gaza landed in an open area near Ashkelon, where residents reported hearing at least one explosion.
There were no reports of injuries or damage.
A Salafist terror group that has been at loggerheads with Gaza’s Hamas government took responsibility for the rocket fired at southern Israel on Saturday.
The past week has seen an uptick in tit-for-tat exchanges in Gaza, with Palestinians firing small volleys, and Israeli aircraft attacking installations belonging to Hamas hours later.
On Friday, the IDF deployed at least two Iron Dome anti-missile batteries in southern Israel, two days after three rockets were launched at Israel from the Gaza Strip.
One missile defense unit was stationed near the Mediterranean port city of Ashdod and another placed near the southern city of Netivot.
Israel’s Channel 10 also referred to a third battery stationed near Ashkelon.
Military sources said they were concerned about the Salafist group, which is affiliated with Islamic State and has been brazenly firing at Israel — in violation of a truce that has been in place since last summer’s brutal war — apparently with the intention of triggering Israeli retaliatory strikes against the Gaza rulers.