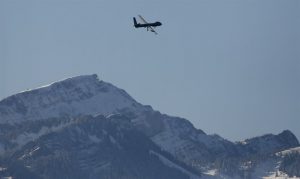 Vehicles in a convoy belonging to a Hezbollah Islamic organization commander were attacked on the Syrian side of the Syria-Lebanon border by an Israeli UAV that fired two missiles at it. According to some reports there was damage but no casualties, as the target was able to escape before the blast, like reported by inn.com.

Arab media reported Wednesday a targeted air strike against a Hezbollah vehicle traveling on the Beirut-Damascus road and transferring weapons from Lebanon to Syria. Reports attribute the attack to the Israeli Air Force, claiming it was carried out by a drone near the border between the states. Reports in most Arab media indicate that there are apparently no casualties.

A commander of forces supporting the Assad regime and a security source told Reuters there were no casualties in the incident because the car passengers had managed to escape before the blast. A Hezbollah official who spoke to AP said there were two passengers in the car. He said the first missile exploded near the car while the second missile was launched at the vehicle after the driver fled.

A Syrian human rights organization reported the vehicle attacked was a military jeep belonging to Hezbollah. According to the report, the Israeli UAV fired two missiles at a jeep in the area, and the vehicle sustained heavy damage. The tracking center claimed not to know what happened to the car passengers. It was also reported that it may be a vehicle belonging to Hezbollah. The attack occurred at an unusual time for attacks attributed to Israel that usually occur during the night.

The IDF announced last week on Arabic platforms that even during the coronavirus crisis, the new Syrian Army 1st Brigade commander, Lua Ali Ahmed Assad, continues to help the Hezbollah Islamic organization to entrench on the Golan Heights front. In the video posted, the brigade commander is seen on a front-line tour that included a visit to known Hezbollah sites with Hezbollah’s southern head commander Haj Hashem.

“Hezbollah’s establishment in Syria and the Golan Heights in particular is intended to enable the organization to produce hostile infrastructure against the State of Israel and does so in cooperation and under the auspices of the Syrian regime; we will not allow this establishment,” said IDF Spokesman in Arabic Avihai Edrei.