You are here: Home / Mediterranean / Israeli soldier wounded by gunfire on Lebanon border 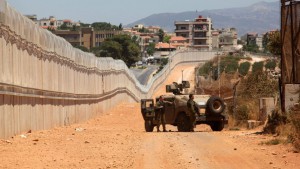 An Israeli soldier was lightly wounded by gunfire from Lebanon on Wednesday border, the military said.
Israel Defense Forces said a group of soldiers working on defenses on the border was fired upon from a vehicle passing on the Lebanese side, near the northern Israeli town of Metula.

The soldier was hit by shrapnel and was lightly hurt. He was evacuated to hospital.The soldiers, members of the Golani infantry brigade, responded with opening fire using their personal assault rifles.

A similar incident occurred in the area in July, when shrapnel hit the military identification tag of a soldier positioned at a military post in Metula. The military said at the time it believes the shooting was errant fire.

On Tuesday, a 15-year-old was shot and killed on the Egyptian border. The teen was repairing the border fence with his family members, who are Defense Ministry contractors. The foreman of the workers said an Egyptian policeman fired at the teen, after mistaking him for a smuggler.