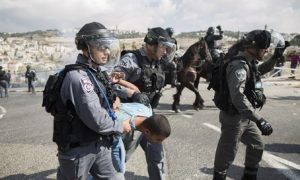 Israeli Shin Bet said that a Hamas terrorist attack at Jerusalem’s Teddy stadium had been prevented with the help of the country’s military and police.

“The General Security Service in collaboration with the Israeli armed forces and the police thwarted the plans of a Hamas group cell that had been planning terrorist attacks in Jerusalem, including at Teddy stadium, as well as against the IDF forces [Israel Defense Forces] in Ramallah and Binyamin district,” Shin Bet said.
According to the press release, three Palestinian suspects were arrested in March.

Prime Minister Benjamin Netanyahu has praised the work of the special services.

“I am grateful to Shin Bet, the armed forces and police for thwarting the attack at Teddy stadium. Perfect job. We are constantly fighting against terrorism,” Netanyahu said on Twitter.

According to the special service, the investigation revealed that the suspects had tried to create an explosive device following instructions downloaded from the Internet, and even bought various chemicals, nails and metal tools for this. The suspects, however, were arrested before they could assemble the explosive device.