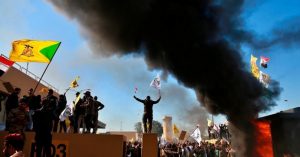 Pro-Iranian militias in Iraq are at a crossroads amid rising tensions with the US. Over the weekend several activists affiliated with Asaib Ahl al-Haq, a group the US sanctioned in January, waved flags and celebrated the US “withdrawal” from Iraq. They may have spoken too soon. In Washington, a plan was revealed that shows US generals were asked to prepare to confront these groups, like reported by shafaaq.com.

The Iranian-backed groups in Iraq are a mass of former Shi’ite militias called the Popular Mobilization Units or Hashd al-Shaabi. Organized as brigades, they were incorporated into the Iraqi security forces in 2017 and 2018. They are well armed with their own warehouses, rockets and armored vehicles. Many of them, such as the Badr organization have been linked to Iran’s IRGC since the 1980s. Those who came out of these Iranian training networks, such as Abu Mahdi al-Muhandis, came to control groups like Kataib Hezbollah. Muhandis was killed alongside IRGC Qud Force head Qasem Soleimani by a US airstrike in early January.

Now, these groups say they are ready to fight the Americans. Harakat Hezbollah al-Nujaba has put up photos on Facebook in which it destroys the White House. At the same time the leaders of the groups are reticent to show their faces in public as much as in the past, afraid of US drone strikes.

Akram al-Kaabi of Harakat Hezbollah claims the US is hunting him. He should know, he was in Iran several times since January planning attacks on the US and his group has put out “secret” footage it obtained from US bases in which it says the “countdown” to US withdrawal has begun. Nujaba was sanctioned in March 2019.

Iran has sent an Iraqi-born Hezbollah member to unify the militias and sent Ali Shamkhani, head of the Supreme National Security Council of Iran, to Iraq to coordinate pressure on the US.

Hezbollah’s man in Iraq, Mohammad al-Kawtharani hasn’t been seen much recently. Like the rest of the militias he is keeping a low profile. Alongside him is Qais Khazali, whose Asaib Ahl al-Haq has threatened and fought the US in the past. A one-time detainee of the Americans, Khazali was sanctioned in December. The US added Asaib Ahl al-Haq to its list of terrorist groups in March 2020.

Kataib Hezbollah has also upped its rhetoric about the US. It held a drill to prepare to “defend” against a US air assault last week. Along with other groups it has harkened back to the period 2005-2009 when it fought the US. One video shows Kataib Hezbollah attacking a US Abrams tank.

Adding all this together forms a picture of these groups preparing to fight the US. We know that US officials and local military commanders have received frequent warnings about such attacks. Additionally, there are almost weekly rocket attacks on bases where US soldiers are located and against the Green Zone where the US embassy is located.

The US is repositioning forces now in Iraq, consolidating them and removing trainers and diplomatic personnel. This could be preparation for what is expected to be more attacks or US retaliation. It could also be what the US says it is: Repositioning due to the coronavirus threat.

For the militias, the order from Iran must come to up their attacks. Most of them have remained at the stage of just propaganda and hoping to use parliamentary methods to get the US to leave.

The militias have their own party in parliament called the Fatah Alliance, the second largest in Iraq. Muqtada al-Sadr, head of the largest party, also wants the Americans out.

But peacefully. His former follower Khazali is prepared for a conflict. Hiding somewhere in Iraq he has hoped the Iranians will eventually take the reins off his fighters. In 2017, Khazali went to Lebanon to threaten Israel. His worldview, like the IRGC in general, is an “axis of resistance” from Iraq to Syria and Iraq that will fight the US and the Israelis.

But for now the leaders of the PMU must decide if it is worth risking their gains in a confrontation. They can read the US media which says the US is worried about escalation. They know the Pentagon was ordered to prepare plans to eradicate Kataib Hezbollah. They know that those plans faced some pushback. They also know the US is distracted by coronavirus and that US President Donald Trump wants to end “endless wars.”

Two roads lie ahead for them: Let the Americans slowly leave peacefully, or try to accelerate that withdrawal with attacks.