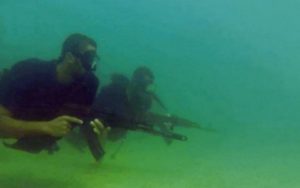 Israel’s navy has in recent years understood that seabased terror attacks can also come from under the water, a threat that has grown since the last conflict with Hamas in 2014.

During Operation Protective Edge in 2014, five Hamas frogmen (naval commandos) tried to infiltrate Kibbutz Zikim before they were confronted and killed by the IDF. In the last three years since the conflict Hamas has significantly expanded its naval commando unit with a reported 1,500 frogmen who have underwater scooters which can bring them further out to sea.

In 2015 the navy began deploying dozens of sensors from a new system named “Aqua Shield” which can detect and alert the navy to suspicious underwater movement.

The sensors were placed on the sea floor near Gaza and Lebanon’s water borders with Israel.

The navy has also placed more emphasis on training for underwater infiltrations. In August the navy’s Salvage and Underwater Missions Unit held a wide-ranging twoweek drill in Haifa dubbed “Noble Melinda” with its counterparts from the US and France.

But even with the increased amount of training and advanced technology deployed by the IDF to counter the threat, the navy does not yet have a clear solution to the problem like the army has against tunnels, with the underground barrier currently under construction around the Gaza Strip.

Israel is highly dependent on the sea, with over 90% of imports arriving by ship. While the country’s navy is relatively small compared to other IDF corps, it still has a significant amount of territory to protect – even more since the expansion of the country’s maritime exclusive economic zone (EEZ) from 40 to 150 nautical miles from shore years ago.

“The importance of the sea for Israel is very clear. Everything in the country comes via the sea. Israel can never be in the position where its waters are not protected,” the senior naval officer said.

“Eight years ago Israel’s EEZ was not significant, but we have had a game-changer since then,” he said, referring to the natural gas drilling rigs which supply around 60% – and soon 75% – of Israel’s electricity.

“The fact that [there are] gas storage centers for our energy is both a positive and a negative,” the officer stated, explaining that the rigs are clear targets for enemies on Israel’s northern border. Hezbollah, which is believed to have long-range missiles, including precision ballistic missiles received from Iran, can hit the rigs and ships inside the EEZ that are the responsibility of the navy.

“We believe that Hezbollah has the ability to strike any spot in our waters,” the senior naval officer stated.

While there is no hermetic protection on the sea, due to the threat posed by Hezbollah’s arsenal of Grad rockets and other longer-range projectiles, the navy has upgraded its weapons and defensive systems on its entire combat fleet.

While existing Sa’ar-5 and Sa’ar 4.5 ships are being upgraded with the integration of new radars and electronic warfare systems, Israel is set to receive new Dolphin-class submarines and new Sa’ar-6 Corvettes in the coming years, which are set to be operational by 2021. The Sa’ar 6 will have a crew of 70 sailors, a range of 2,500 miles, and advanced capabilities able to deal with a wide range of threats, including Iron Dome short-range defense missile launchers and Barak- 8 long-range surface-to-air missile naval defense system.

“The bread and butter of the Sa’ar 6 is its defense and offensive capabilities,” the senior officer stated. “I wish we could have this ship on our waters right now.”