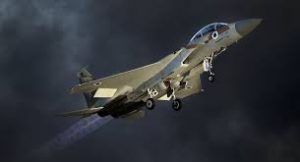 Israeli military aircraft struck targets in the Gaza Strip early on Monday in response to two rockets fired from the Palestinian territory toward the city of Ashdod, the military said, like reported by ynetnews.com.

In a statement, the military said fighter jets hit Hamas military targets, including sites for digging underground tunnels, some of which stretch into Israel. There were no immediate reports of injuries from the airstrikes.

The rockets were launched from the town of Beit Hanoun in the northern Gaza Strip toward the sea close to the southern city, with no reports of damage or injury from the rockets launched.

While the IDF is currently investigating whether the launch was carried out by the Hamas terrorist organization, who maintains control on the Strip, or by the Palestinian Islamic Jihad – Israel’s policy is to hold Hamas responsible for any fire emanating from Gaza.

“The IDF takes very seriously any terrorist activity against Israel and is prepared and ready to act as resolutely as necessary against attempts to harm Israeli citizens and their sovereignty,” the IDF stated. “The terrorist organization Hamas bears responsibility for what is happening in and out of the Gaza Strip, and it will bear the consequences for the terrorist acts against the citizens of Israel.”

Hamas, meanwhile, accuses Israel of failing to honor its truce obligations, which include easing a crippling blockade on the Palestinian enclave, and allowing for large-scale infrastructure and job-creation projects.

Israel and Hamas have fought three wars since the Islamic militant group seized power of the coastal enclave in 2007. While no major confrontation has occurred since 2014, there are often cross-border skirmishes and flare-ups between the sides.

While militant rocket attacks and Israeli retaliatory artillery and aerial strikes are frequent, they have largely been subdued in recent months due to the coronavirus outbreaks in both territories.