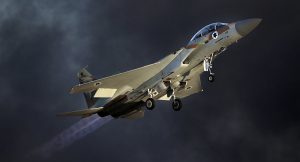 Speaking at the annual Herzliya Conference, Lieberman said Israel had no interest in all-out-war but warned it would respond forcefully to any direct Iranian aggression on its borders, which he called “the new reality”.

“Iranian missiles did not reach Israeli territory but either fell in Syria or were intercepted by the Iron Dome,” said Lieberman. “No building, person or infrastructure was hit. We have hit almost all the Iranian infrastructure in Syria. They must remember that if it rains here (in Israel) it will pour there.”

Commentators suggested that the significance of the flare-up between the region’s two arch enemies came in its timing – hours after Donald Trump withdrew the US from the Iran nuclear deal his predecessor helped draw up.

Referring to Israel’s immediate military priorities, and offering clues as to what Israeli jets have been aiming at, Lieberman said: “We will not allow Iran to bring anti-aircraft warfare (to Syria) and close Israeli air space.”

Lieberman said: “We have no interest in escalation but we must be prepared for any scenario… We are facing a new reality where Iran is attacking Israel directly and trying to harm Israel’s sovereignty and territories.”

Trump is far more likely than Barack Obama to give US military support to any Israeli action against Iran, and while Russian forces fought alongside Iranians in Syria to support President Bashar al-Assad, Russia also has good relations with Israel.

But Lieberman said Israel would not be complacent about its relations with the US and Russia, saying: “It cannot be taken for granted that we have the ability to talk and consult with the two biggest powers at a moment’s notice.”

Trump’s withdrawal from the nuclear deal, and his re-imposition of sanctions, will add further pressure to an already-struggling Iranian economy, which Lieberman said was “on the verge of collapse”.