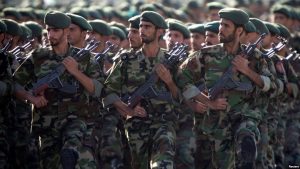 Speaking to VOA Persian’s special program about President Donald Trump’s decision on the Iran nuclear deal, Menashe Amir said his intelligence sources detected the IRGC activities in Lebanon on Tuesday. Amir, who is based near Jerusalem, said the nature of those activities was not specified but he believed they could involve IRGC forces bringing Iranian missiles closer to Israel’s borders in preparation for an attack.

In the past few days, Israeli officials increasingly have warned of a potential Iranian strike in retaliation for recent Israeli military action in Syria aimed at curbing Iranian efforts to establish military bases there.

Amir said Israeli media were reporting increased activity by Israeli military aircraft in northern Israel on Tuesday. He said Israel may take military action against Iranian missile sites in the region to preempt any Iranian strikes. Iran has vowed to avenge recent attacks on its forces and their allies in Syria, without detailing the timing or nature of its response. Israel has acknowledged intervening militarily in the years-long Syrian civil war, but rarely has claimed credit for specific attacks.

Iran has long supported and supplied Lebanon’s Hezbollah militant group, which has an influential role in the Lebanese government and whose forces rival those of the Lebanese military. But the extent of Iran’s deployment of its own IRGC forces in Lebanon is not clear. STRATFOR, a U.S. publisher of intelligence analysis, reported in 2010 that there were about 4,000 IRGC troops in Lebanon at the time, deployed among five different bases. Amir said Iran and Hezbollah also have used Lebanese territory to train militiamen from Iraq, Afghanistan and Pakistan.

The revelation of unusual Iranian military activity in Lebanon coincided with Trump’s announcement of his decision to withdraw the United States from the 2015 Iran nuclear agreement on Tuesday. Under the deal, his predecessor Barack Obama and leaders of five other world powers suspended sanctions against Tehran in return for Iran accepting restrictions on its nuclear program to prevent it from developing nuclear weapons.

“Our job is not to let the Islamic Republic’s defeat turn into a defeat for the Iranian people, but rather into an opportunity for them to realize the freedom they deserve and save all of us from the evil of the regime,” he said.

Pirzadeh is a member of the Iran National Council for Free Elections, a dissident group founded by U.S.-based Iranian crown prince Reza Pahlavi.

Iranian President Hassan Rouhani, in a televised statement following Trump’s announcement, said Iran will consult with European powers, Russia and China in the next few weeks to determine if it is in Iranian interests to remain in the 2015 nuclear deal. He also vowed that the U.S. will not succeed in hurting the Iranian economy by re-imposing nuclear-related sanctions.

But the U.S. pullout from the deal has put European powers in a tough spot in their economic ties with Iran, according to prominent Iranian journalist Alireza Nourizadeh.

Speaking to the VOA Persian show from London, Nourizadeh highlighted the case of Austria’s seventh-biggest bank Oberbank, which had signed a deal with Iranian officials last September to finance Austrian projects in Iran.

Austrian media reported in late March and early April that Oberbank put the deal on hold ahead of a possible decision by Trump to quit the nuclear deal and re-impose sanctions. The deal would have made Oberbank one of the first European banks to do business with Iran since the 2015 deal took effect.

Leaders of the three EU signatories to the deal, Britain, France and Germany, promised to keep abiding by the Iran nuclear deal despite the U.S. withdrawal.

In separate remarks on the VOA Persian program from Los Angeles, senior advisor to the Iranian American Jewish Federation Sam Kermanian said the European powers and the previous Obama administration had expected that the deal would dissuade Iran from pursuing regional domination.

“They hoped Iran would use the deal’s economic benefits to help the Iranian people and save them from pressure and misery. Unfortunately, this did not happen,” Kermanian said.