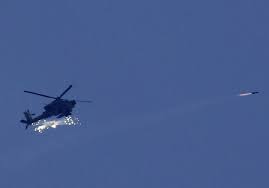 In perhaps the second Israeli airstrike in Syria over the past two nights, Syria’s state news agency reported early on Thursday that an “Israeli aggression” was carried out with a helicopter over an area in Syria’s Quneitra governate on the Syrian Golan Heights, without resulting in any damage.

Arab media outlets reported that the target of the attack was a Hezbollah outpost near the Israeli border.

Overnight Wednesday, Syrian state media alleged that one person was killed and six others were wounded in an Israeli strike on the Mediterranean port city of Latakia, in the country’s northwest.

Syrian state media later quoted an unnamed military official as saying a plastic factory and other targets were struck in Syria’s coastal region. It added that Syrian air defense units shot down some of the Israeli missiles before they reached their targets.

It said the casualties were civilians.

Israel has launched hundreds of strikes against Iran-linked military targets in Syria over the years but rarely acknowledges or discusses such operations.

Israel views Iranian entrenchment on its northern frontier as a red line, and it has repeatedly struck Iran-linked facilities and weapons convoys destined for Lebanon’s terrorist Hezbollah group.

The airstrike at dawn Wednesday occurred nearly two weeks after an errant Syrian anti-aircraft missile hit deep into Israeli territory and set off air raid sirens near the Dimona nuclear reactor in the south.

The incident prompted Israel to respond with airstrikes on the missile launcher and other targets in Syria.