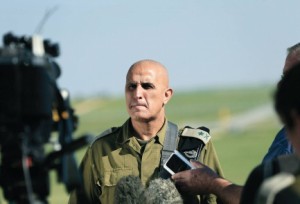 Israel and Hamas share common interests, and the Palestinian Islamists must stay in power in the Gaza Strip to prevent the enclave descending into chaos, an Israeli general was quoted as saying on May 12.

Israel and Hamas fought a 50-day war last July and August, and Netanyahu has likened the group to Islamic State insurgents sweeping Syria, Iraq and elsewhere in the region.

But speaking to the heads of Israeli villages on the Gaza periphery, Turgeman said Hamas seeks stability and “does not want global jihad” — an umbrella term Israel uses for Islamic State of Iraq and the Levant (ISIL), al Qaeda and their off-shoots.

“Israel and Hamas have shared interests, including in the current situation, which is quiet and calm and growth and prosperity,” said the general, who is in charge of Israeli forces on the Gaza and Egyptian borders.

“There is no substitute for Hamas as sovereign in the Strip. The substitute is the IDF (Israel Defence Forces) and chaotic rule … and then the security situation would be much more problematic,” he said.

An Israeli military spokesman did not contest the accuracy of the quotes attributed to Turgeman from the private meeting on Monday with the municipal leaders. Netanyahu’s office had no immediate comment. Nor did Hamas officials in Gaza.

“The alternative is to try to find periods of quiet, as much as possible,” Turgeman said, arguing against rightist proposals that Israel, which withdrew from Gaza in 2005 after 38 years of occupation, retake the cramped and impoverished territory.

Hamas, which took power in Gaza after a brief 2006 civil war with forces loyal to U.S.-backed Palestinian President Mahmoud Abbas, wants Israel’s destruction and has fought three Gaza wars against it. But Hamas, which reconciled with Abbas last year, has also voiced interest in a long-term truce with Israel.

The dominant Palestinian Islamist group has sought to curb more radical organisations in Gaza that chafe at its authority and has ordered them to hold fire against Israel.