You are here: Home / MidEastGulf / Israeli Druse mobilize against islamists for their Syrian brothers 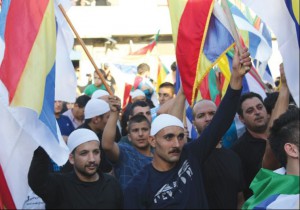 Automatic gunfire pierced the sky in Peki’in as a former Paratroop Brigade officer worked up a crowd of flag-waving Druse below.

They didn’t really need his encouragement. This crowd of around some 1,000 protesters from across Israel and the Druse diaspora have been following the news from Syria, where jihadists from the al-Qaida- linked Nusra Front reportedly killed some 20 Druse in the northwestern Idlib province last week.

The reports – often riven by rumor and hearsay – have spread like wildfire in the Israeli Druse community, sparking a call to arms out of a desperate desire to provide succor to their brethren on the other side of the Golan border fence.

Since last week, they have reportedly raised more than NIS 10 million though grassroots fund-raising in Druse communities across Israel to send to Syria by way of Druse in Jordan. They say the money will go toward humanitarian aid as well as for weapons, though the details of how the latter will work out seem foggy at best.

Tamir Hijawi, 41, the former paratroop officer on stage in Peki’in, in the Upper Galilee, said the protests held on a daily basis by Israeli Druse this week have been held to show their people in Syria they are not alone, and footage of the demonstrations is being posted on Facebook, YouTube and elsewhere.

Like others, he called on Israel to give the Syrian Druse weapons and to open the border to allow Israeli Druse to join the fight against jihadist rebels.

Hijawi said whatever happens, the Syrian Druse will never abandon their villages. “This is an existential war for them, they will die on their feet before they run,” he said.

Minutes before he spoke, hundreds of Druse men marched through the town waving the multi-colored flag of the sect, escorted by young men in flag-draped cars and ATVs, chanting “With blood and spirit we will liberate Sweida,” a reference to a majority Druse city in southwestern Syria. They spoke of their desire to fight in Syria no matter the odds, saying that a massacre of Druse is already under way.

Syria is home to some 700,000 members of the sect, mainly in Jebl Druse (the Druse Mountain) area in the southwest. Israeli Druse are watching Sweida as well as the village of Hader, on whose outskirts Nusra fighters are now mobilized.

IDF Chief of Staff Lt.-Gen. Gadi Eisenkot on Tuesday told a meeting of the Knesset Foreign Affairs and Defense Committee that the army would do whatever it could to prevent the massacre of Syrian refugees on the border. The IDF Northern Command has held situation assessments on the matter and has maintained surveillance on the area, though for the moment it considers the situation to be calm.

Duqan Attallah is an attorney from the Druse village of Yirka, northeast of Acre, and a consultant to the municipality. He said it was no accident that Yirka is situated upon a hill and has a sweeping view of the Western Galilee.

“We have always been chased our entire history. We always had to take the high ground and hold it, to protect ourselves.”

A professed atheist, he says politics and whatever differences there are between the Druse in Israel proper and those on the Golan Heights go out the window instantly when their co-religionists are in danger.

When Attallah and other Druse described their sect, there was a theme of kinship that would be familiar to many Jews, a parallel they would often point out. Attallah and others described a sort of “Druse Geography,” where Druse who meet abroad feel an instant bond and try to work back how they may be related or have mutual friends. They also described a sort of familial bond to other Druse across the world and how whenever there’s a natural disaster or some other calamity anywhere and Druse are among the victims, they feel a push to come to their aid.

Like Jews, many of them spoke of a kinship honed by persecution and bloodshed.

Though there’s much poverty in Yirka there are also pockets of wealth.

The town is probably most known to the wider Israeli public as the home of My Baby, a colossal baby supplies emporium and amusement park, and driving through town, it has the appearance of one long, unbroken industrial zone. Perhaps that’s why, according to Attallah, as much as a quarter of the NIS 10 million donated over the past week came from the village, brought by locals in shekels, dollars, euros, and even gold.

Wahel Muadif, the leader of a Druse temple and religious school in Yirka, said last week a young child gave him a 50 agorot piece to send to the relief effort. He said the child’s gesture is part of a wider spirit of solidarity in the community, which will also be on display on Saturday at a gathering of Druse from across the country at the Tomb of Jethro, the principal prophet of the sect, near the Horns of Hattin, west of Tiberias.

The clergyman was straightforward when asked what he expects of Israel.

“We are asking that Israel help our people, with military and humanitarian aid. We deserve this because of our high level of [IDF] enlistment.”

Israel should carry out air strikes on the Nusra Front inside Syria, he said.

The “Covenant of Blood” Druse signed with Israel and the debt the country owes them for their fallen soldiers was a narrative repeated frequently to The Jerusalem Post in the Galilee and on the Golan Heights this week. Another narrative placed Israel at the center of the story unfolding in Syria, saying that Israel is helping Nusra by giving medical assistance to jihadists because they are the enemies of Israel’s enemies – Assad, Hezbollah, and Iran – and that Israel prefers that attention be shifted away from it to the chaos elsewhere in the region.

The IDF denies it is helping jihadists, and maintains that its policy is to aid noncombatants and members of moderate rebel groups.

In this wider narrative, Israel is portrayed as simultaneously at least indirectly responsible for what is happening or will happen to the Druse in Syria, and also the only one with the power to save them.

Also, while everyone said they do not believe the Druse in Israel are getting carried away about the situation in Syria and exaggerating the facts on the ground, every Druse the Post spoke with said that emotion and fear are playing a central role in the debate.

In the foothills of Mount Hermon on the northern Golan Heights, Majdal Shams is a happening place; at least for a Wednesday night in a town of about 9,000 and change. A handful of cafes and bars were open at 11 p.m. and traffic was backed up on Main Street as young men – some waving Druse flags and riding on top of cars – did what young men do in small towns – cruise up Main Street till it ends, turn around, and do it again.

Majdal Shams is one of the four “Syrian Druse” towns on the Golan, and few residents have accepted Israeli citizenship. On Monday, at a rally to support Syrian Druse, protesters held Syrian flags and portraits of President Bashar Assad, a common scene any time a demonstration is held in the town.

One local hot spot is the Green Apple, a spacious Irish pub (or close enough) that opened two and a half years ago on a block off Main Street next door to two other bars, with young men and women drinking beers at a higher altitude than anyone else in Israel.

Nader Madah, 33, the manager of the Green Apple, said the normality is bittersweet: “It’s probably because we’ve become indifferent after four years of massacres in Syria.”

Madah takes pride in the Druse solidarity shown recently by Israeli and Golan Druse, but with a heaping dose of cynicism. As he puts it, Assad and the Syrian regime killed Druse dissidents long before Jabhat al-Nusra did – including a cousin of his studying in Damascus he said was “disappeared” by the secret police after posting anti-regime statements on Facebook.

Only now do people want to get involved, Madah sneers.

“They [the Syrian Druse] supported Assad and they thought he would protect them, but now, at the moment of truth he’s not there to save them.”

Skepticism aside, he said enough Druse are passionate or outright crazy enough to do anything if a full-on massacre unfolds in Jebl Druse, even cutting the border fence and charging into the Syrian part of the Golan Heights. Like others, he said emotion is trumping cold calculation.

As he speaks, a heavy-set local named Imam walks up, and gives his take on the situation across the border.

He attaches some blame to Israel for giving medical assistance to jihadists, and for, in his words, waiting four years to take a stance regarding the Syrian civil war.

He also seems to think emotion and ethnic solidarity may call the shots for the Druse, all other considerations aside.

“Druse are like bees. Someone comes and hurts one of them, and then the whole swarm comes after him,” he says.

Down the road from Majdal Shams, in the Golan Druse village of Ma’sada, a donation box for Jebl Druse sits on the counter of a corner store. According to Naal Yousef, 33, it has been there since before the civil war began four years ago, to raise money for poor Druse trying to make ends meet in Syria.

He says locals contribute whatever they can, and that if things get worse for the Druse in Syria, there is no telling what could happen. He has no doubt young men will cut the border fence and race into Syria to fight, to do unthinkable things. “People will lose their minds,” Yousef says.

That said, he is adamant the Druse are not exaggerating, that they are not getting carried away at all.

“We are all one family and we are under attack. We will do anything, whatever it takes,” he says.