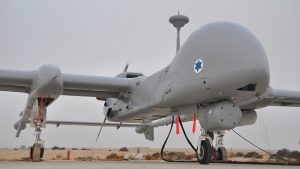 A Palestinian militant linked to the Islamic State jihadist group in the Sinai Peninsula has reportedly been killed by an Israeli drone in retaliation for rocket fire launched from the Egyptian territory into Israel, like reported by toi.com.

Gaza native Zaher Abu Sitta was killed by the drone strike earlier this week, according to the Amaq News Agency which is linked to the IS faction in the Sinai.

The reported strikes were in the area of Rafah and Sheikh Zweid in northern Sinai, and came shortly after the firing of two rockets on Sunday night that landed in the Eshkol region of Israel causing no damage or injuries.

The Islamic State group took responsibility for the attacks.

Israel has not indicated or confirmed that it had responded to the rocket attack in any way.

IS often claims that Israel is assisting its opponents or directly targeting its forces in Syria.

The IS announcement that it had fired the two rockets was made by the Amaq News Agency, which is affiliated with the terror group.

IS claimed that during clashes with Egyptian forces, “Jewish” aircraft were assisting Egypt’s security forces and that it fired rockets at the Eshkol region in Israel in retaliation.

The two rockets struck areas inside the southern Eshkol region, an area that abuts both the Gaza Strip and the Sinai Peninsula, the IDF said at the time. A military spokesperson said one of the missiles had been located in an open field near the communities of Magen and Ein Habesor, but that soldiers and police were still looking for the second.

The Sinai-based offshoot of Islamic State has been waging a bloody war with Egyptian forces for years and has also occasionally directed its attacks at Israel, launching rockets at nearby Jewish communities and in one case at the southern city of Eilat.

On Sunday, members of the terrorist group carried out multiple attacks on six Egyptian checkpoints near the border, killing at least six soldiers and injuring dozens more.

Egyptian officials said the near-simultaneous attacks took place at and around the town of Sheikh Zweid, with dozens of fighters using heavy machine guns and mortars. Apache helicopter gunships were called in to repel the attackers, said the officials.

Occasionally, the terrorist group also launches rocket attacks at Israeli targets, in what many analysts believe to be shows of strength and attempts to score propaganda points.

In April, one rocket struck a greenhouse in the community of Yuval in the Eshkol region, slightly damaging the structure, but causing no injuries. Another rocket was launched at Israel by the terrorist group in May, but it struck an open field.