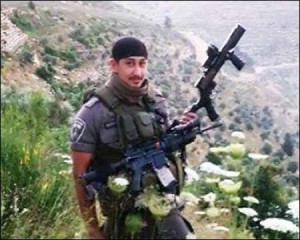 Israeli-American trains Kurdish forces on the Iraq-Iran border in urban warfare and counterterrorism – and says he’s not afraid to walk around with a kippah.

After completing his stint in the Israeli army, Corporal Mike, a young American convert to Judaism, was looking for his next big adventure. Joining Kurdish forces fighting Islamic State seemed like a noble enough cause, but when he landed in northern Iraq a few months ago, he decided to change course.

“My prediction is that ISIS will be gone in a year’s time,” the 24-year-old, who asked that his last name not be published, said in a recent interview while on leave in Israel. “The real enemy is Iran. People simply aren’t aware of how much their presence is spreading around the Middle East.”

So instead of hooking up with the Peshmerga battling ISIS in Iraq and Syria, like many other foreign volunteers, Mike opted to join Iranian Kurdish forces in northern Iraq preparing for possible clashes around the border. Their fear, he explains, is that Iran may exploit its improved standing in the world these days to crack down on members of its Kurdish minority located on both sides of the border.

For the past three months, Mike has been stationed with a faction of the Kurdish Democratic Party of Iran (KDPI) based in the town of Koy Sanjaq. He is one of two foreign volunteers currently embedded with forces in this mountainous region along the Iranian border – needless to say, the only Orthodox Jew among them.

“I put on tefillin everyday,” he boasts, “I keep Shabbat if I’m not on guard duty, I walk around with a kippa on my head, and I try to keep kosher as best as I can, which is why I’ve lost lots of weight in recent months. Everyone knows I’m Jewish and that I’m from Israel, and nobody makes an issue about it.”

His life choices may not be typical, but neither is his background. Born in Fort Sam Houston, a U.S. Army post in San Antonio, Texas, Mike is the son of a half-Japanese, half-Russian mother and a U.S. military commander who discovered late in life that he was Jewish. Growing up as an army brat, Mike popped around from state to state until his family eventually settled in the West Coast, where, together with his mother, he underwent an Orthodox conversion to Judaism. During his middle school and high school years, he visited Israel on various programs, and after a few years of community college, decided to make a permanent move.

“I sold my car and motorcycle and enlisted in the IDF,” he says.

Mike joined the Israeli border police in April 2013 and spent most of his two years in the military patrolling Palestinian towns and villages outside Jerusalem. The skills he developed and honed during his army service in Israel, he says, should come in handy in his new terrain. “We’re going to be setting up a program now where we’ll be training Kurdish forces in urban combat and counter-terrorism – the sort of things I did with the Border Police,” he says.

Mike is not the first Israeli army veteran to join the Kurds in battling their adversaries. Canadian-born Gill Rosenberg, who also moved to Israel and was falsely rumored last year to have been captured by ISIS, made international news as the first foreign woman to join Kurdish forces fighting the extremist militant organization.

His main contact when he landed in Iraq was Ryan O’Leary, a former veteran of the Iowa National Guard who took Mike under his wing. O’Leary is the only other foreign volunteer serving with the KDPI today, and like Mike, he had originally planned to join Kurdish forces fighting ISIS but ultimately came to believe that Iran was a greater threat.

“Mike is here acting on his own,” O’Leary said in a telephone conversation from his base in Iraq, when questioned about the young American-Israeli’s affiliation. “He made that specifically clear to the leadership. They wanted to make sure he wasn’t working with the Israelis or Americans because they don’t want any conflicts.”

O’Leary said that after Mike brushes up on his language skills, the plan is to have him join local forces on operations, including across the border.  “What we mainly do is gather intelligence. If there are soft targets like military patrols, we also take them out,” he said. “But we’re not interested in starting a full-blown war just yet.”

The KDPI is one of several political groups representing the estimated 7 million Iranian Kurds living today between Iran and the semi-autonomous Kurdish region of Iraq.

Among them is a small group who claim to have Jewish roots, and in his spare time, Mike has volunteered to help some of them look into the possibility of immigrating to Israel.

Only recently, he discloses, have his parents figured out where he is and what he’s up to. “Rumor has it that there’s a reward of $100,000 for my head, so I didn’t want to share the information with too many people,” he says.

Is he afraid? “There’s only one thing I’m afraid of,” Mike responds, “and that’s God.”