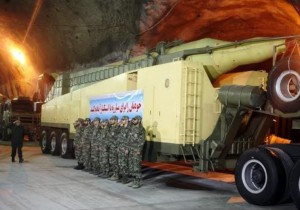 The recent announcement of the successful test-firing of a new long-range Iranian missile represents a challenge to the US by the Islamic Republic, which has found Washington willing to “bend over backwards” to justify Tehran’s loose interpretation of restrictions on its nuclear program, a senior Israeli arms control expert warns.

Dr. Emily Landau, head of the Arms Control and Regional Security Program at the Institute for National Security Studies in Tel Aviv, spoke out on Wednesday after Iran tested its Imad surface-to-surface missile, which has a reported range of 1,700 kilometers, a warhead weighing 750 kilograms, and an accuracy range of 500 kilometers.

On Sunday, Iran announced the successful test of the domestically made Imad missile.

“This is Iran’s first long-range missile that can be guided and controlled until hitting the target,” Defense Minister Hossein Dehghan was quoted as saying, according to an AFP report.

Landau said the Imad “is a leap in terms of its precision, and it is capable of carrying a nuclear payload.

“Iran is testing the waters in order to establish and ensure rules of the game for its future activities – like inspections at its military facilities, and its presence in Syria,” she said. It has found a compliant US, willing to accept its interpretations, she argued.

“The Imad missile test has immediate and very significant implications, as a test case for implementation of the recently concluded Iran nuclear deal,” Landau said. “It goes directly to problematic ambiguity and confusion that has been built into the nuclear deal.”

Specifically, the test exposes the problematic relationship between the Joint Comprehensive Plan Of Action and United Nations Security Council Resolution 2231, which endorses the Iran deal, but is not identical to it.

Under the UN resolution, “Iran is called upon not to undertake any activity related to ballistic missiles designed to be capable of delivering nuclear weapons, including launches using such ballistic missile technology, until the date eight years after the JCPOA Adoption Day or until the date on which the IAEA submits a report confirming the Broader Conclusion, whichever is earlier,” Landau said.

“In order to justify the test, Iran is focusing on the words ‘designed to be capable,’ claiming that the missile is designed for defensive needs, and that Iran has no nuclear intentions.

The US administration doesn’t seem to be buying that nuance, but the Obama administration is nevertheless trying to mitigate the dangerous implications of the Iranian test by insisting that there is a clear distinction between the JCPOA and UNSC resolutions,” she added.

By differentiating between the two, Washington “is hinging its lack of political will to confront Iran by saying that while Iran might be violating UN commitments – and it has done so often in the past – it is upholding the nuclear arrangements. So what do we learn? That UNSC resolutions don’t really matter, nor does Iran’s clear record of violating these resolutions, including on a crucial issue such as the delivery system for a nuclear weapon,” Landau said.

“Moreover, the messiness of the situation whereby the JCPOA and UNSC Resolution 2231 – which is supposed to endorse the deal – are not in sync on such a crucial issue is puzzling to say the least. The lack of compatibility is opening the way for Iran’s dangerous interpretations,” the defense analyst cautioned.

“So what we are seeing is Iran taking immediate steps to test its interpretations, to see what will be acceptable, just as we saw in August-September with regard to inspections at the military facility Parchin. Unfortunately, what Iran is seeing is that not only is the US not challenging Iran on its interpretations, but the Obama administration is actually bending over backwards in order to provide explanations that justify these interpretations. We are thus already learning a lot about the degree of political will that we can expect from the P5+1 [nations] as far as ensuring that Iran meets its commitments according to the JCPOA. What we see is anything but encouraging.

This pattern is likely to continue with other aspects of Iran’s program – wherever room for interpretation has been built into the deal,” she added.