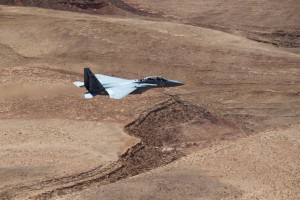 Multiple air strikes carried out by the Israeli air force reportedly hit a weapons cache and a convoy of military vehicles of the Lebanese militant group Hezbollah and the Syrian regime’s forces.

Arab media reports claim the Israeli aircraft also used Lebanese airspace. The Israel Defence Forces (IDF) has neither confirmed nor denied the attacks in line with the position Israel always takes when it comes to sensitive operations.

The aerial assault is believed to have taken place during the night of 29-30 November. According to the London-based Rai al-Youm newspaper, the Israeli warplanes hit the convoy on the Damascus-Beirut highway.

Both the weapons facility and the convoy were under the command of the Shia militant group Hezbollah, which has long been fighting on the side of Syrian President Bashar al-Assad. At least four huge explosions were reported near the Syrian capital during the strikes. There is still no word on any casualties.

In the past, several air strikes in Syria and at multiple locations bordering Israel were alleged to have been carried out by Israeli forces though the Israeli government hardly confirms any of these.

The current attack comes close on the heels of the IDF confirming it targeted an Islamic State (Isis)-held position near the Syrian border. The IDF saidon Monday, 28 November, that the air strike was a response to the attack on Israeli soldiers in the region. Israeli forces “will not hesitate to act against terror groups that operate against the State of Israel”, the IDF warned in a statement.