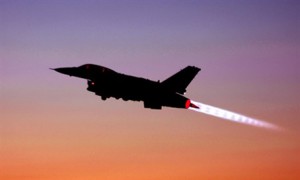 Sources in Syria reported on Monday that the Israeli Air Force (IAF) struck an advanced missile shipment headed for the Iran terror proxy Hezbollah, as it passed through the Qalamoun mountain region on the border with Lebanon.

The shipment to the Lebanese Shi’ite terror organization included long-range Scud missiles according to the reports, as cited by Channel 10.

IAF fighter jets reportedly arrived in the skies over mountainous region in the morning and launched at least one missile at the target.

An Israeli confirmation or denial of the reports has yet to be issued.

Monday’s report follows on the heels of Syrian media reports Saturday of an alleged Israeli airstrike in the Qalamoun region that took place Friday night around 11 p.m.

Friday’s reported strike was said to have targeted a unit positioned in the area of the village Ras al-Ein, as well as an army base at the edges of the village Al-Qutayfah, in strikes on both Hezbollah and the Syrian regime army.

Last April, it was reported in Arab media that IAF jets struck a Scud missile shipment as it was leaving the Syrian capital of Damascus.

The IDF has taken a policy of preventing advanced rockets from reaching Hezbollah on Israel’s northern border, which already is said to have a rocket arsenal ten times that of Hamas in Gaza.