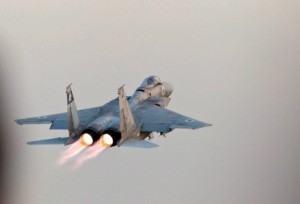 Syrian media outlets reported that the Israeli Air Force had struck a joint Hezbollah and Syrian military position post in the mountainous Qalamoun region near Syria’s border with Lebanon. Israel did not comment on the reports.

Meanwhile, the IAF on Monday night struck a Hamas military site in the Gaza Strip in retaliation to a rocket that was fired from Gaza into southern Israel on Monday morning.

No injuries or damage were reported in the rocket attack, for which the Islamic State-affiliated Salafi extremist group Aknaf Beit al-Maqdis claimed responsibility.

The IDF said it held Hamas responsible for all attacks from Gaza and would act to maintain quiet in southern Israeli communities.